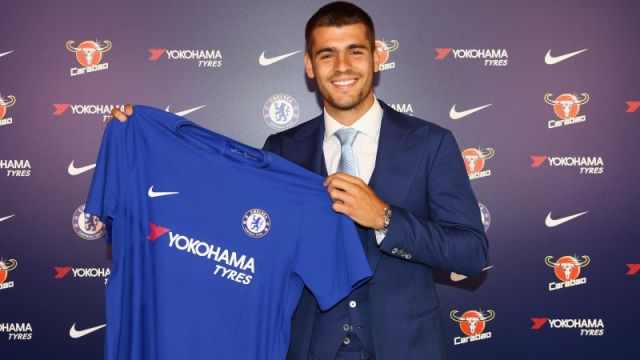 Chelsea have completed the signing of Real Madrid striker Alvaro Morata for a club record £58million, which could rise to a whopping £70million.

The transfer was received quite well by the Chelsea faithful while the Madridistas were understandably quite sad. The 24-year-old finished as Los Blancos’ second top scorer and had the best goals-to-game ratio after Barcelona’s Lionel Messi, scoring 20 times despite playing just 1,872 minutes (20.8 games), he looked like Real’s next great striker.

The player has all you need to become one of the world’s best, good pace, clinical finishing and a knack of scoring in big games. Chelsea were on the search for a new striker after Diego Costa has been shown the exit door by Antonio Conte and have found their replacement.

Speaking of Conte, he was the one who signed Morata at Juventus, but didn’t get a chance to work with the player. He tried to sign the striker at Chelsea but failed last summer. After leaving Real’s tour in America, Morata said:

“I’m going to the team managed by the coach who has placed the most faith in me and that’s great for me. I’m very happy.”

Real also paid a tribute to Morata on their website saying:

“Real Madrid C. F. and Chelsea FC have reached an agreement regarding the transfer of Álvaro Morata, subject to the player completing his medical.

“The club wishes to express its thanks for the dedication, professionalism and exemplary conduct displayed by the player over the years, spanning his time in our academy right through to his spell as a member of the first-team squad.”

As Morata is only 24 and capable of playing at the highest level, he seems to be the perfect fit at Chelsea. Real will look to buy a replacement due to Karim Benzema’s lacklustre performances last season.

Chelsea fans, Real Madrid fans, what do you think of Morata? Is his exuberant price tag going to be value for money or is he going to flop? Let us know in the comments below.