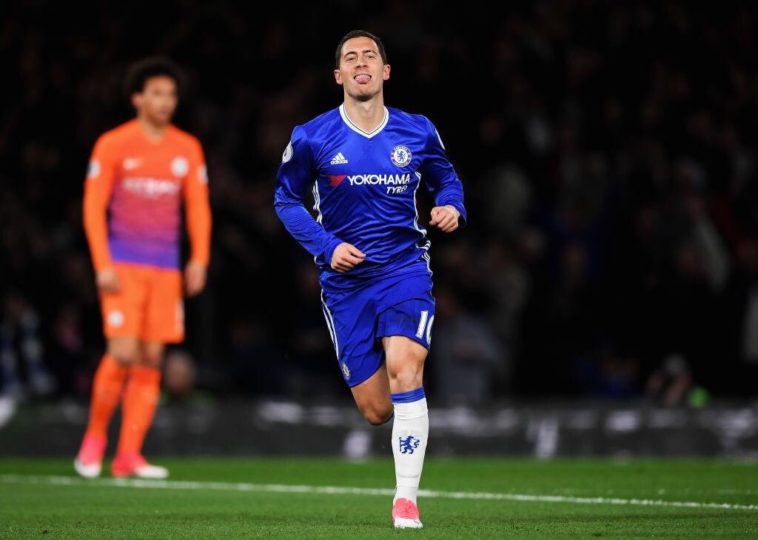 Eden Hazard scored two goals in the first half to lift Chelsea to a 2-1 victory over Manchester City at Stamford Bridge on Wednesday.

The Belgian opened the scoring in the 10th minute. Cesar Azpilicueta crossed the ball to Hazard who curled a shot past an off-balance Willy Caballero. Chelsea’s star player then finished the rebound of a saved penalty when Pedro was tripped in the box in the 34th minute.

Chelsea maintain their seven-point lead over Tottenham at the top of the Premier League table with eight matches left in the season.

Sergio Aguero scored for Manchester City in the 26th minute after Thibaut Courtois errantly cleared the ball to David Silva. The Belgian keeper who played his 100th match for Chelsea saved Silva’s shot, but Aguero scored on the rebound.

Gael Clichy, Fabian Delph, Vincent Kompany, and N’Golo Kante all received yellow cards during the second half of the match.

City had the possession advantage at 60-40, but the Chelsea defence withstood the 17 shot attempts. Kurt Zouma started his first game of the season, and his first game since his suffering a cruciate knee ligament injury last season.

At halftime, Chelsea switched Zouma for Nemanja Matic, putting Azpilicueta back into the right center-back position that he has dominated in for the season. Chelsea started to play deeper in their own half to close out the match with the one-goal lead.

Where in the world is Diego Costa?

Diego Costa is Chelsea’s leading scorer in league matches at 17 goals, but hasn’t scored since March 6 against West Ham United. The Spaniard is still waiting for his 50th Premier League goal.

It is good that Eden Hazard stepped up today to score for Chelsea. As long as Chelsea are still at the top of the table, fans will not be complaining. But Costa needs to get back in form and onto the scoring sheet soon.

Eden Hazard danced around City defenders today. With two crucial goals, he was easily the man of the match.