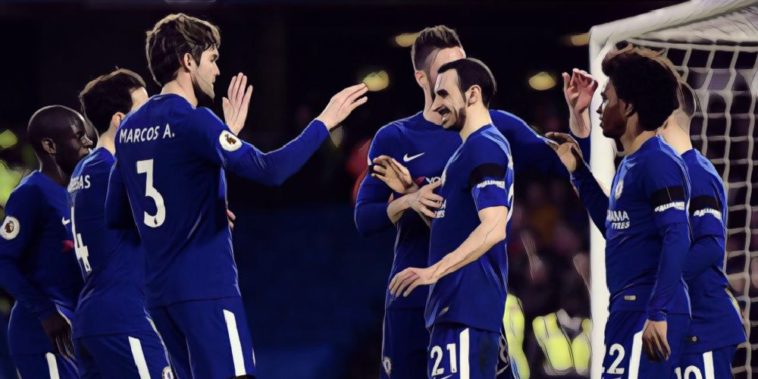 Willian has been the brightest of stars in 2018, leading Chelsea to a 2-1 victory over cross-town rivals Crystal Palace on Saturday.

Heartbreaking losses to Manchester United and City have soured the mood at Stamford Bridge, but the Blues livened up the festivities with a dominant attacking display.

The Brazilian winger had a few shots that didn’t go in before getting one past Wayne Hennessey with a bit of help from a deflection in the 25th minute.

Chelsea continued with their positive play later in the 32nd minute. Marcos Alonso drove the ball up the left flank, smashing a ground cross into the box that Willian deftly left for Eden Hazard. The Belgian opted to pass it to an incoming Davide Zappacosta who took his shot, eventually bouncing off of Kelly’s left knee who was credited for the own goal.

Crystal Palace scored a consolation goal in the 90th minute after Wilfried Zaha pulled the Chelsea defenders to the right, opening up room for Patrick van Aanholt to gently put it past Thibaut Courtois.

Crystal Palace had won three of the last five games against Chelsea, but the West London club came away with a crucial three points in their chase a top four position.

Here are five things we learned from Chelsea’s win over Crystal Palace.

A happy Hazard is the best Hazard

Chelsea’s superstar was clearly upset with the tactics against Man City, and he didn’t hide his frustration in the post-game interview.

“When you leave the pitch you have the impression that you’ve ran, but you haven’t played a game of football, that’s a pity,” Hazard said to the media. “We could have played on for three hours and I wouldn’t touch a ball.”

Saturday’s match against Crystal Palace was a completely different story. Chelsea didn’t sit back in fear to defend, and Hazard influenced the match from kickoff. He constantly dropped back into the midfield to get the ball, proceeding to spray passes to the wide areas where Willian, Zappacosta, or Alonso were running into space.

Giroud adds another dimension to attack

High crosses into the box are back on the menu at Stamford Bridge.

Chelsea fans are too used to seeing low crosses from the wingbacks, only to be blocked by the infinite number of feet of defenders on its way to the six-yard box. The Blues haven’t played with a physical striker to win the aerial duels before Giroud came into the fold.

Olivier Giroud commands attention in the box with his ability to win headers. More defenders are needed to limit his effectiveness, but Giroud is also able to win headers to pass it to the likes of Hazard and Willian. They can now trail with late runs into the box for open shots. They aren’t needed to win the physical battles on the pitch.

Of course, this isn’t Giroud’s only skill. His off-ball runs to the near post puts him in good positions to get shots from the ground in front of goal. When the former Arsenal striker leads Chelsea’s line, defenders can’t expect what’s coming anymore.

Christian Benteke started the match on Saturday after missing the reverse fixture in October. Roy Hogdson’s choice at striker may have lost him the first half of the match.

Palace struggled to build up attacks. Chelsea’s defence was more than adequate to keep up with the duo of Benteke and Alexander Sorloth. Cesar Azpilicueta, Andreas Christensen, and Gary Cahill can go head-to-head with the physical presence of Palace’s forwards. Long balls to them were shut down, leaving the Eagles with only two shots in the first 45 minutes.

Replacing Benteke with Zaha to start the second half improved Palace’s attacking play. Zaha was crucial in the 2-1 upset win against Chelsea in October with his runs into the channels slicing through the defence.

Benteke has some pace, but Zaha could outrun the Chelsea defenders with ease to cause more problems. It’s a shame for Palace that they were only able to get one goal in the end. Perhaps if he played the full 90 minutes, the result could’ve been different.

Bad luck on both sides

The final result could have been very different for both clubs. Giroud had a possible hat trick denied thanks to goal-line clearances by James Tomkins and the woodwork. Instead of celebrating with his new club, he’s still searching for his first Premier League goal with Chelsea.

Palace had a goal disallowed after referee Anthony Taylor called a controversial foul for an alleged high boot. Jairo Riedewald looked to have pulled his foot out before contact with Cahill, but Taylor may have missed it in the fracas that led to Sorloth’s denied goal. Had that gone in, it’s entirely possible for the match to have ended in a draw as Crystal Palace scored a few minutes later.

They were also unlucky to concede the second goal to Chelsea. While the build up and passing were sublime, Zappacosta’s shot was blocked by Kelly’s foot into Hennessey’s head, finally taking one more bounce off of Kelly’s knee before going into the net.

We can only imagine what this game could have been had things gone as they were expected.

Chelsea’s attacking display was on point on Saturday, and perhaps it was a dress rehearsal for the mid-week clash against Barcelona on Wednesday.

The Blues will need a goal to have a chance of advancing to the quarter-finals of the Champions League. A defensive game just won’t cut it at Camp Nou. Chelsea will need Hazard to influence the game like he did against Palace on Saturday.

For him to do that, he will need Giroud in the starting lineup, or else the Belgian will be isolated from play once again. The French striker did not start in the first leg at Stamford Bridge. Chelsea played wonderful counterattacking football against Ernesto Valverde’s team, but Antonio Conte needs to set up his side to be on the front foot.

It’s going to be a tough game for Chelsea, but Hazard could play like he did today with the help of Giroud, Willian, and N’Golo Kante around him. Saturday showed that Chelsea could escape Camp Nou with a ticket to the next round of the Champions League.