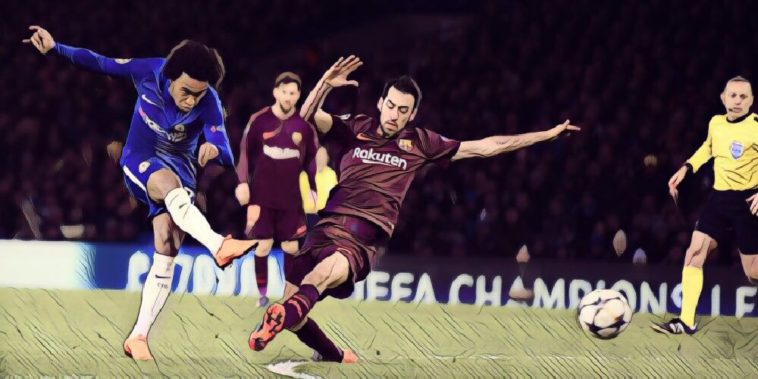 Lionel Messi finally scored his first career goal against Chelsea, and it was an important away goal for Barcelona in their Champions League last-16 matchup.The Argentine had failed to score against the Blues for 730 minutes before he calmly slotted Andres Iniesta’s pass into Thibaut Courtois’ goal.

Willian scored the first goal of the game after being unmarked just outside the box. Sergio Busquets went to close the gap, but a quick move to his right gave him enough space to fire a right-footed curler into the corner of the net.

Other than Andreas Christensen’s errant ball that led to the equalising goal, Chelsea played a defensive masterclass of a match, reminiscent of the 2012 semifinals between the same clubs. Both teams will head to Camp Nou for the second leg in March with the Catalan club holding the away-goal advantage.

Here are five things we learned from the draw between Chelsea and Barcelona.

This wasn’t Antonio Conte’s first time going up against an attacking team like Barcelona. He knew what to do from the start, especially since the Italian National Team that he coached at the time knocked Spain out of Euro 2016 with a 2-0 victory.

Despite giving up 74% possession to Barcelona, Chelsea limited the space for their opponents to play through by defending deep and narrow. Without the room to dribble or make a pass, the Blues would constantly get a tackle in to start a counter attack.

Chelsea outshot Barcelona 11 shots to 7, and they could have been ahead by more as two of Willian’s shots hit the woodwork before he finally put one past Marc-Andre ter Stegen.

This wasn’t a “hang on for your dear life” type of defensive football. This was a tactical masterclass by the Chelsea manager to suffocate Barcelona’s attacking play, while swiftly creating chances of their own before the away team could react.

One mistake unravels the match

As much as Conte got the tactics spot on for the first leg, one mistake ruined the good result.

Andreas Christensen tried passing to Cesc Fabregas across the Chelsea box. The wayward pass did not reach its intended target, instead being pounced on by Iniesta before Cesar Azpilicueta and Victor Moses could react. Finally, Barcelona have gotten through the Chelsea fortress.

Barcelona press as a team to stifle any build-up play from Chelsea’s backline. Pressure forced Christensen to get the ball out of the corner, but passing it slowly into the middle proved to be costly.

Hindsight is wonderful thing, but Christensen should have tried to clear the ball to the other side of the pitch. He would have had enough space to blast a long ball to switch to play. If it went out of play, Chelsea would have time to reset, and they would have been successful in getting the ball out of a dangerous position.

One lapse in judgment have caused Chelsea to go into Camp Nou with a disadvantage. Chelsea will really need to repeat their defensive performance while ironing out the individual mistakes to have any shot of success in the second leg.

Kante cleaning up the spills

N’Golo Kante played like his 2016/17 days, breaking up all kinds of attacks from opponents. This was crucial for Chelsea’s counterattack on Tuesday night.

Chelsea’s midfield haven’t been as solid as last season with Nemanja Matic moving on to Manchester United. Tuesday nights midfield reminded me of the past, even though Kante’s partner was Cesc Fabregas.

Barcelona’s slower pace in attack gave Kante more time to react to passes. Chelsea have been susceptible to a high-energy press, causing their shape to collapse at times. There was no such breakdown in defence or midfield on Tuesday night.

Morata or Giroud? How about neither?

It was surprising to see both Alvaro Morata and Olivier Giroud on the bench for Chelsea. A lot has been said about the need of a true striker as a focal point for the attack, and it seemed like Conte was reverting back to his old ways of Hazard to lead the line.

Conte made many, including myself, eat their words. The point of having Hazard as striker was to include Willian and Pedro in the mix. The goal was to counterattack quickly once Chelsea gained possession. By using three extremely quick players up front, the Blues were able to gain an upper hand.

Morata could’ve been a good choice as starter since he’s a great counter-attacker. He would have attracted more attention from the Barcelona defenders and would have freed Hazard to play a role that he’d probably have been more comfortable in. Conte had the right idea in making the switch, but it was too late in the match with only seven minutes before added time. If he had more time on the pitch, maybe he could’ve made a difference against a tired Barcelona side.

Chelsea head to Camp Nou on March 14 after Premier League contests between Manchester United, Manchester City, and Crystal Palace. The Blues will need to bring all the firepower they have to retake the lead in hostile territory.

Barcelona will have less rest in between matches as they have to face Girona, Las Palmas, Atletico Madrid, and Malaga before welcoming Chelsea. If Tuesday was any indicator, Ernesto Valverde will have to figure out a way to break through Chelsea’s packed defence, while stopping Hazard and company from counterattacking with pace and precision.