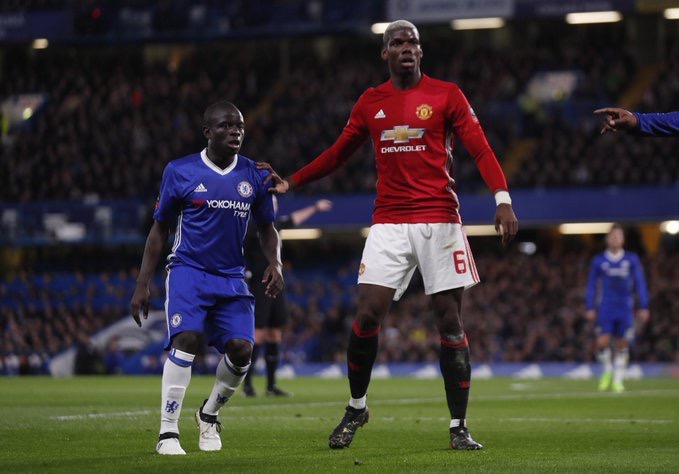 Chelsea overcame a gallant 10 man Manchester United team performance to book their place in the semi-finals of the FA Cup.

It will be a game remembered for the heat on the pitch and on the side lines but also remembered for a flaky performance from referee Michael Oliver.

Manchester United lined up with a back three, to match up with Chelsea’s formation which worked well in the early stages for Jose Mourinho’s team.

United were the better team in the opening exchanges with the team playing positively and looking to attack wherever possible.

The combination of Henrik Mkhitaryan and Marcus Rashford upfront was working very well with the pair floating around the forward lines and shifting the Chelsea back three.

Chelsea came into the game around the twenty minute mark and began to test United.

A moment of sheer brilliance from Eden Hazard saw the Belgium turn Chris Smalling, leaving the defender on the floor before bursting into the box and forcing a magnificent save from David De Gea. From the resulting corner Gary Cahill’s attempt was parried incredibly by De Gea who was saving United yet again.

A lack of consistency

The task became even tougher for Mourinho’s men when Ander Herrera was sent off after being given a second yellow card. Both cards were incredibly soft and Herrera certainly did not deserve to be sent off.

It was a bad moment for referee Michael Oliver who suffered from a real lack of consistency throughout the game, not for the first time this season for the young referee.

The heat turned up on the touchline with Antonio Conte waving imaginary cards at the referee. Not a thing people like to see and shows a lack of gamesmanship from the Italian.

Conte then got into an incident with Jose Mourinho with Conte rushing over to confront Mourinho for some reason, Conte was certainly irate but Mourinho kept his cool in a heated situation.

Mourinho was forced to sacrifice the one player who could make something happen for his team, Henrik Mkhitaryan. Marouane Fellaini came on to replace the Armenian following Herrera’s dismissal to sure up the midfield area.

The second half was what everyone expected with Chelsea dominating the ball and testing the Manchester United defence. It did not take long for them to find their breakthrough which came from N’Golo Kante.

The midfielder shifted the ball at his feet to get the shot away from twenty yards into the bottom left of the goal. Kante’s only two goals this season have come in games against Manchester United.

Manchester United nearly found an equaliser with Marcus Rashford embarking on a mazing run that twisted and turned Gary Cahill to get into a scoring position but Courtois was equal to the shot and was able to save Rashford’s effort.

The rest of the half was a case of Chelsea domination with United left frustrated and unable to get out of their half.

Unfortunately it was a game that was ruined by a poor refereeing decision and yet again in a domestic game we see the flaws in the performances of our referees.

It was also a game in which we saw Jose Mourinho’s relationship end with the Chelsea fans who chanted ‘Judas’ at their former manager and he made a point of banging his hand on the Manchester United badge on his coat. Mourinho will be disappointed with the result but happy with the way his players did not cave in and fought until the very end.