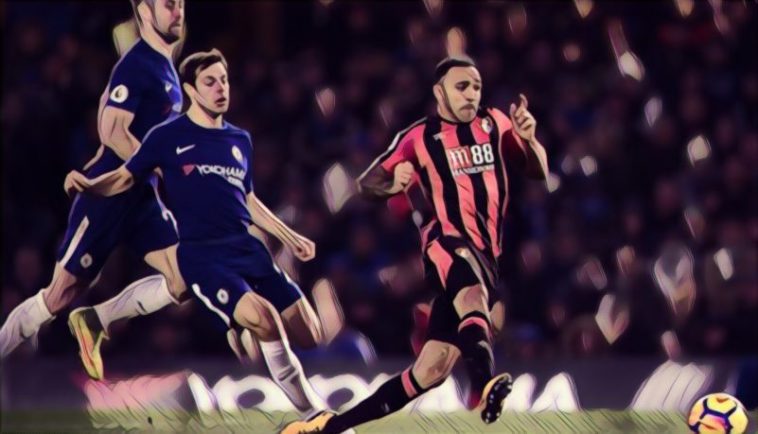 The Premier League title holders are looking like shadows of themselves, a far cry from the team traditionally known for their fortress-like defending. Once Andreas Christensen went down with a hamstring injury, Eddie Howe’s side found a crack in the castle walls, breaking the gates wide open.

Here are five things we learned from Bournemouth’s upset win over Chelsea.

Christensen going down has to be the turning point of the match because it forced Gary Cahill into the center of the defence. Bournemouth showed no mercy in the second half, leaving the Chelsea captain in a daze after the three goals.

Chelsea’s (a.k.a. Roman’s “Galactic Empire”) vulnerability was Cahill (a.k.a. the thermal exhaust port that led to the destruction of the Death Star). While Bournemouth deserves the credit for finishing chances, they have Cahill to thank for each goal.

The first goal started with Tiémoué Bakayoko losing possession in the Chelsea half. A quick give-and-go pulled Cahill out of position to give Wilson a direct path to poke the ball past Thibaut Courtois.

Not wanting to be beat by Wilson again, Cahill followed the Bournemouth forward who was already covered by Bakayoko. In doing so, the England international left Stanislas unmarked, which ultimately led to the second goal.

Finally, Nathan Aké was right in front of a flat-footed Cahill who watched as his former team-mate tapped in the final goal of the match.

Even though it hurt to watch almost all of Chelsea today, I’d be hard pressed to give a bigger blame to anyone other than Cahill. Perhaps Antonio Conte’s tactics should be questioned for not adapting to his opponents, but Cahill’s mistakes were sloppy. This was certainly unexpected from a experienced Premier League player.

Possession means nothing when you don’t use it

I’ve always been told to save my money, maybe for a rainy-day fund or future investment. While I recognize its importance, I also know money is of no value if I don’t use it.

The same analogy can be used in football. It’s great to have possession of the ball, but it’s completely useless when you don’t create chances from holding the ball.

The first-half was still anyone’s match with the score level at nil-nil. Chelsea had 59 per cent ball possession, but had zero shots on target. Second half stats would be skewed due to the Blues having to chase a goal or four late in the match, but getting only five shots on target with 73 per cent possession is inexcusable.

Bournemouth’s back line of Aké, Steve Cook, and Simon Francis did a superb job of protecting Asmir Begovic who saved all five shots that came near his goal. However, Chelsea’s ineptitude in front of goal was their ultimate downfall.

A lack of a true center forward could have been the problem. Álvaro Morata was dealing with an injury, Michy Batshuayi went out on loan to Borussia Dortmund, and newcomer Olivier Giroud only signed his new contract today. Here’s hoping a striker will be able to play next Monday against Watford.

Barkley’s first start since May 2017

January signing Ross Barkley made his first Premier League start since May 12, 2017 in a match where he scored for Everton against Watford. Those looking for him to recreate some magic from that day would be disappointed at his performance tonight.

Chelsea failed to find their footing in the match, and Barkley was unable to shake off the rust from not having started in a Premier League match in more than half a year.

Only managing to make 15 accurate passes in his 54 minutes of play, he was subbed off for Cesc Fàbregas who arguably made more of an impact in a shorter time.

Despite the off day for Barkley, the minutes were useful for him to get back to top-flight form. I suspect he started because Willian, Morata, and Batshuayi were unavailable for various reasons. Things can only get better, right? I can’t even say that to myself confidently.

Chance squandered to move up the table

Manchester United gave up a goal within 11 seconds of their match against Tottenham. Right away, this was Chelsea’s moment to catch up to them in the Premier League table, against a mid-table Bournemouth side that Chelsea defeated 2-1 only a month ago.

You couldn’t paint better circumstances for Chelsea today. Excited by two deadline day signings and a winnable match at home against a side they previously beat, Chelsea looked to be level with their former manager José Mourinho, who has gone to the dark side to manage a rival. The storyline was perfect.

Instead, Chelsea drop down to fourth since Liverpool won a day before.

There will be other chances in the future, but this could have been a turning point in the race for the best loser–I mean runner-up–of the eventual Premier League champions Manchester City. For now, Chelsea fans will act like there is a crisis at their club, and deservedly so.

Callum Hudson-Odoi has been tearing it up in Chelsea’s development squad at only 17-years old. He has taken the Chelsea youth team far into the Checktrade Trophy, defeating League One side Oxford United to reach the semifinals.

His performance has caught the eyes of many Chelsea fans, and most importantly the manager who gave Hudson-Odoi his senior debut in an FA Cup matchup against Newcastle last Sunday.

Hudson-Odoi can add “Premier League debutant” to his CV, having played 25 minutes against Bournemouth. While the match was already lost, it didn’t stop him from dribbling with purpose and passing with an intent to score while the rest of his team-mates seemed to have given up.

He’s been with Chelsea’s academy since he was eight-years old. Hopefully he’ll spend another decade or two with the Blues given his wonderful performances despite only being short cameos.