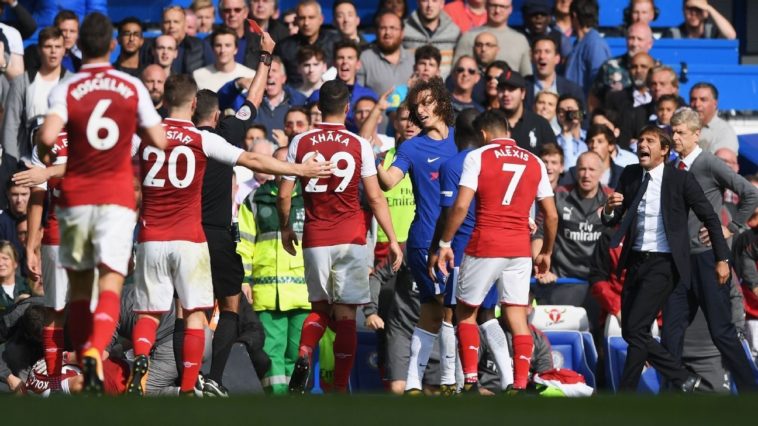 Arsenal claimed a point at Stamford Bridge for the first time since 2011 against 10-man Chelsea.

As expected with a London Derby, the match started at a fierce pace. Chelsea were immediately on the front foot with Willian testing the Arsenal defence early on. Then, in the space of two minutes, Arsenal had two chances to take the lead. Hector Bellerin was at the heart of both moves with a cross into Welbeck that he headed wide and another cross for Lacazette whose shot was saved by Thibaut Courtois.

Sead Kolasinac aimed a low drive at Courtois who was unable to hold onto it but no Arsenal players could pounce. Then came the biggest chance of the half for Chelsea. Pedro was found by ex-Gunner Cesc Fabregas and raced clean through but Laurent Koscielny was hot on his heels and Petr Cech made an excellent save to deny the Spaniard.

Aaron Ramsey bundled his way through the Chelsea defence with a combination of willpower and skill only for his shot to hit the post. Alexandre Lacazette was there for the follow-up but his shot was high and frustratingly wide. The ball was at an awkward angle but with an open goal Lacazette really should have had his third Premier League goal for Arsenal.

Despite the score being 0-0 at half-time, Arsenal put in an impressive performance and were unlucky not to be ahead.

The tempo slowed down in the second half with neither side creating as many clear cut chances as they did in the first 45 minutes. Kolasinac had an opportunity but he ran out of room in the Chelsea penalty area.

Shkodran Mustafi thought he had given Arsenal the lead after heading in Granit Xhaka’s free-kick but it was ruled offside.

Even the introduction of Hazard and Alexis was not enough to break the deadlock for Chelsea or Arsenal respectively.

For the third game in a row against Arsenal, Chelsea ended with 10 men. This time David Luiz was sent off for a late tackle on Kolasinac.

Arsenal may not have won but they ended a run of five straight defeats against Chelsea at Stamford Bridge. It’s about time Arsenal had a decent away performance against a top side.