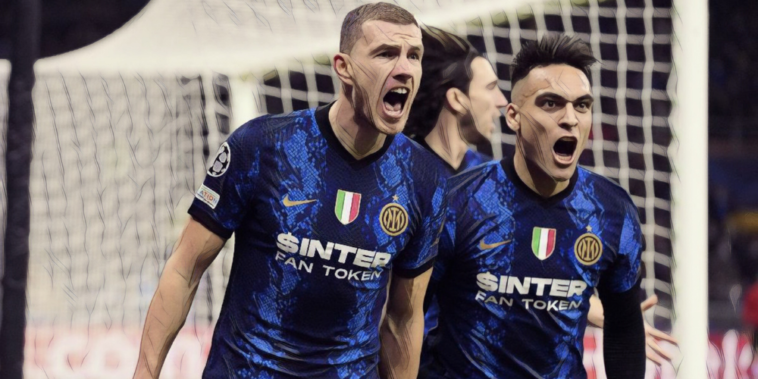 Following the fifth round of Champions League group stage action, we pick out some of the heroes and villains from the best and worst of the midweek fixtures.

There are just five places remaining in the last 16 following the penultimate round of group stage games, with both Chelsea and Manchester United assuring their place in the knockout stages in matchday five.

Manchester City beat Paris Saint-Germain to ensure top spot in Group A, whilst Liverpool maintained their 100% record in this season’s competition after beating Porto 2-0 at Anfield.

Elsewhere there were vital wins for Sporting Lisbon and Inter Milan, the latter reaching the knockout stages for the first time in a decade.

Sebastien Haller is enjoying some season in the colours of Ajax, the forward in career-best form as the spearhead of an exciting side under Erik ten Hag.

Haller was named on the bench with Ajax’s progress as group winners already assured, but was introduced at half-time with the Dutch side trailing against Besiktas and turned the game around with a second-half brace.

The Ivorian became just the fourth player – after Zé Carlos (1993), Alessandro Del Piero (1995), Diego Costa (2014) and Erling Haaland (2019) – to score in each of his first four Champions League appearances last time out, and extended that record to five with a match-winning intervention off the bench in Istanbul.

Sébastien Haller is the first player in Champions League history to score 9+ goals in the first five games of his #UCL career.

Haller has now scored nine goals from his five appearances in the competition, breaking the record set by Erling Haaland during the 2019/20 season.

It continues a remarkable run of form for the former West Ham striker since signing for Ajax, with Haller having now scored 31 goals and provided 12 assists in 42 appearances for the Eredivisie side – a record of 43 G/A in 42 games.

Just how did he miss?

You will have to go a long way to see a worse miss than that of Haris Seferovic this season, the forward spurning a guilt-edged chance to snatch a win for Benfica at Barcelona.

Faced with just the goalkeeper in the third minute of stoppage time, the Switzerland international found himself beyond Marc-André ter Stegen, before somehow contriving to poke the ball wide of a practically open goal.

Benfica break with a numbers advantage in the 93rd minute and Haris Seferovic still somehow doesn't score against Barcelona! 😬

His manager, Jorge Jesus, crumpled to the floor in disbelief at a horrifying miss for Seferovic, who blew a golden chance to move the Portuguese side above Barcelona in the race to secure knockout stage qualification.

Jesus was far from sympathetic post-match either, labelling the miss as the worst he had seen in three decades as a coach.

Young Boys and Atalanta played out arguably the clash of the fifth round of fixtures, a thrilling 3-3 draw that included stunning goals and a late equaliser for the Italian side.

That equaliser came from the boot of Luis Muriel, who with his very first touch curled home a late free-kick to boost Atalanta’s hopes of knockout stage qualification.

The Colombia international had only been introduced just seconds before his decisive contribution, but stepped up to bend in a near-post free-kick and leave Atalanta’s fate in their own hands.

He only had one more after that. 😅#UCL pic.twitter.com/UEJskhflte

Gian Piero Gasperini’s side remain third in Group F and next host second-place Villarreal in a winner-takes-all showdown in matchday six.

Morata struggled to make a meaningful impact as Thiago Silva dominated their personal duel, with the Brazilian producing an extraordinary goal-line clearance to deny the Spanish striker with the score poised at just 1-0.

He lasted just over an hour before being substituted for Moise Kean, boos ringing out around Stamford Bridge as he departed for the bench.

It was an ineffective showing from the forward, one that the Chelsea fans had became accustomed to during his time in the Premier League, an evening to forget for both Juventus and Morata in the capital.

Reece James’ electric performance for Chelsea against Juventus has dominated the headlines, with the wing-back continuing his scintillating form in arguably the best performance of Thomas Tuchel’s reign.

Deserving credit alongside James is another academy graduate, with Trevoh Chalobah continuing his incredible rise to prominence this season.

Chalobah has not faltered since his shock introduction into the senior side this season and capped his latest accomplished performance with the opening goal at Stamford Bridge.

🔵 What a season for Trevoh Chalobah!

The 22-year-old has moved ahead of Cesar Azpilicueta in the pecking order for a role in Chelsea’s back three and looks more assured with each outing, his goal a fine reward for a solid showing as Chalobah joined fellow academy graduates James and Callum Hudson-Odoi on the scoresheet.

Gareth Southgate will no doubt be keeping a watchful eye on the defender, who has shown the ability and temperament to take a rapid rise in his stride this season.

Borussia Dortmund’s Champions League campaign has proved one of capitulation, contriving to be eliminated with a game remaining despite winning their opening two fixtures.

Successive losses to Ajax were followed by a costly 3-1 defeat at Sporting Lisbon in matchday five, with the Portuguese side leapfrogging Dortmund to claim a place in the last-16.

Nico Schultz and Dan-Axel Zagadou endured performances to forget, but it was the contribution of Emre Can – not for the first time in this competition – that ended Dortmund’s hopes of a comeback.

The half-time substitute was sent off following a clash with Pedro Porro, having initially refused to kick the ball out of play for the injured Paulinho.

Can reacted to Porro’s late challenge in a bid to regain the ball and was subsequently sent off, leaving Dortmund in the lurch as the Germans crashed out.

Inter Milan will be in the Champions League’s last-16 draw for the first time in a decade this season, a 2-0 win over Shakhtar Donetsk sealing the Italian champion’s place in the next round.

Edin Dzeko scored both goals for Inter as the Bosnian forward continues to roll back the years for the Nerazzurri, each goal taken in clinical fashion to secure progress at the San Siro.

Dzeko slammed home a loose ball to open the scoring, before heading in Ivan Perisic’s inviting cross to score his 50th goal in European club competition.

The 35-year-old has now scored 10 goals in all competitions for Inter this season, a fine return for the club’s cut-price investment in the veteran this summer.

Paris Saint-Germain’s forward line of superstars struggled to create clear opportunities against Manchester City, with Neymar producing an underwhelming performance in the club’s 2-1 defeat at the Etihad.

The Brazilian was far from his best as he failed to impact the game, and wasted the best chance that came his way just moments before City’s winner.

Neymar burst through with his first real show of intent of the evening, but fired wide of Ederson’s post with the goal gaping – a miss that came back to haunt the PSG star as compatriot Jesus struck City’s second soon after.

If PSG are to make a genuine impression on this tournament, they will need their elite names to be more decisive in the crucial moments.