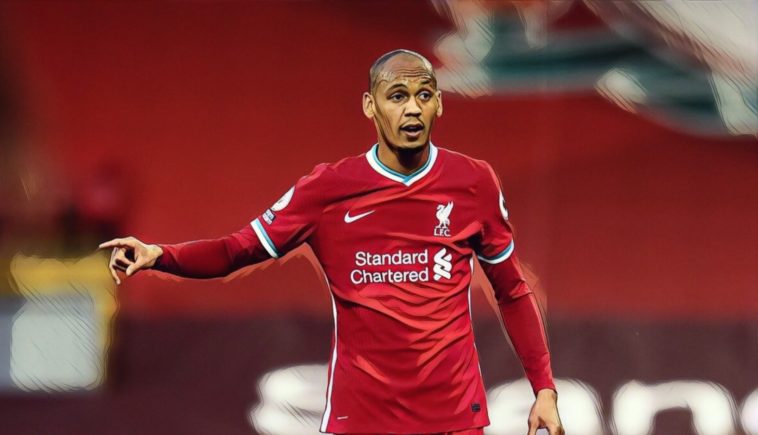 Liverpool legend Jamie Carragher has revealed how stand-in defender Fabinho has helped to improve the Reds defence, despite the continued absence of Virgil Van Dijk.

When the news filtered through that the former Celtic colossus would most likely miss the remainder of the season after suffering a knee injury in the Merseyside derby draw back in October, many feared that the Reds title defence was well and truly over.

However, despite continued defensive injuries, the champions have kicked on in the Dutchman’s absence, winning six and drawing one of their last seven games in all competitions since that controversial encounter at Goodison Park.

Liverpool‘s most recent victory saw them ease past potential title challengers Leicester City, with the Reds keeping a clean sheet as the returning Fabinho put in a stellar defensive display.

The Brazilian international has endured his own injury problems in recent weeks, yet in his few showings at the heart of defence he already looks to have eased the huge loss of Van Dijk.

That latest performance was particularly impressive, with former Reds defender Carragher stating that the 27-year-old has made a huge difference to Jurgen Klopp’s defence, after some shaky defensive displays early on this season.

”It’s an outstanding job from the players who have actually come in,” Carragher told Sky Sports.

MNF analysis of @LFC defending without VVD! Liverpool played against Jamie Vardy one of the quickest strikers in #PremierLeague did they defend deeper? NO!

“When Liverpool went out [against Leicester], people said they would completely change. That they would drop off 10 or 15 yards. I watch a lot of Liverpool’s games and I didn’t quite see it.

“I’ve analysed how they played against Vardy and no one can tell me Liverpool dropped off 10 or 15 yards without Van Dijk. They were still playing a high line, but the difference is the body position the likes of Fabinho adopted.

“Yes, we can talk about him being a midfield player in there, but he’s been outstanding. What he did was play a high line but be ready to run back when the ball went over his head. He ran back and dealt with it.

“When we talk about Van Dijk, let’s not forget he’s been part of a back four for the last couple of years that has had the best defensive record in the league, and I’m sure that would’ve been the case this season with him.

“But there was no doubt Liverpool had huge problems at the start of the season. They conceded three at home against Leeds and then there was obviously the game against Aston Villa.

“We have spoken a lot on Monday Night Football about Liverpool’s line and it’s difficult at times to criticise a team that have a great defensive record and have been so successful.

“There were times when I’d look at the line and think ‘run back’. Certainly, in the Aston Villa game, where obviously Liverpool got it massively wrong.

“At times it was not so much about how high the line was, it was just the fact that I always felt that Liverpool’s defenders needed to be in a position to actually run back. ‘Just run back and match the run. We’re in a decent line, okay they have beat the press and have time on the ball, let’s just give ourselves two or three yards.’ That’s all it was.”

Read: The latest piece of the puzzle: Why Diogo Jota is thriving at evolving Liverpool