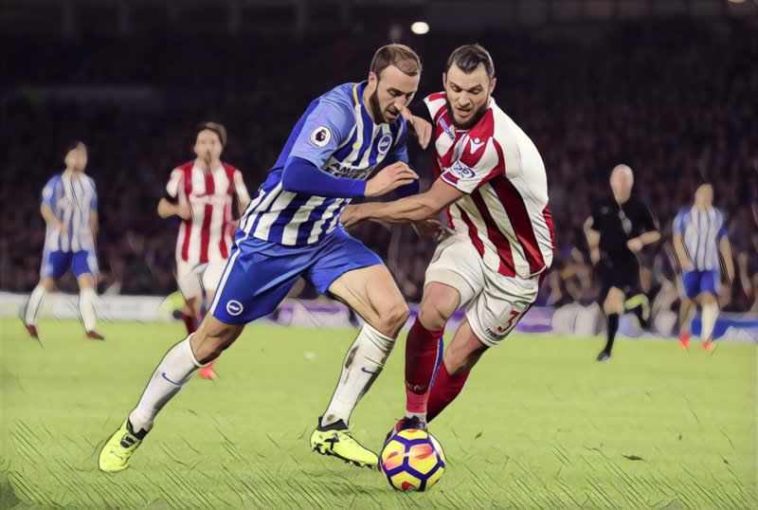 Brighton and Stoke shared the points in an open 2-2 draw. Here are five things we learned.

If in doubt, Enter Shaqiri

Xherdan Shaqiri has now recorded 2 goals and provided 5 assists in his last 8 Premier League matches. Only the Man City players (David Silva – 8, De Bruyne and Sane -6) have provided more Premier League assists this season. The 5 games he has registered assists in have seen his Stoke side win 9 points, that is just shy of 70% of their total points tally this season (13). Shaqiri’s vision is going to be instrumental in this Stoke City side’s success this season. His ball over the top, which Choupo-Moting’s excellent run and delicious first touch and finish put Stoke 1-0 up!

Much like Shaqiri for Stoke, Pascal Groß is insanely important for his team. One better than Shaqiri, he has 3 goals and 5 assists to his name this season, again only the 3 Man City players have more assists to their name. His goals and assists have also contributed to 9 points for his team. Furthermore he has been involved in more than half (61.5%) of his teams League goals this season. After Pröpper made a rather incredible run, the ball was flashed along the box and Groß connected to bring the game level.

One thing that has connected all three newly promoted sides is their defensive displays, for the most part all three have been solid. Brighton have kept 4 clean sheets in their 12 premier league games so far. They boast a very solid centre back pairing in Shane Duffy, who has made the most headed (79) and outright clearances (106) in the league. Paired with Lewis Dunk who has made the most defensive blocks (21), it was astonishing how corners became their Achilles Heel. It seemed as though every ball found Shawcross. Moments after drawing level, a Darren Fletcher corner was deflected off Bruno into Kurt Zouma’s path to essentially head in to an open net. Brighton need to re-find that solid structure that has served them so well. They have only conceded 13 goals in 12 league games. Only 5 teams can better than (the top 4 and Burnley).

Mark Hughes about to follow in Tony Pulis footsteps?

West Brom recently sacked manager Tony Pulis and are now in the search for a Tony Pulis, is Mark Hughes about to put Stoke in a similar predicament? The problem with playing a defensive side who thrives on long balls is that if the clean sheets dry are, the 1 or 2 goals they would usually score now need to be 2 or 3. They were 2-1 up and Izquierdo grabbed an equaliser. They seemed to revert back into their shape and play for the point. They currently sit in 15th, 4 points above the relegation zone. The next four fixtures are vital, they feature two of the top 6: Palace (A), Liverpool (H), Swansea (H), Spurs (A). Stoke surely must beat Palace, or I can see another Premier League manager losing their job before the month is out.

There is an ongoing debate about VAR. Time and time again there are poor officiating decisions made that lead to goals or take away goal scoring opportunities. Should Murray have had a penalty? Yes! Do we need VAR?