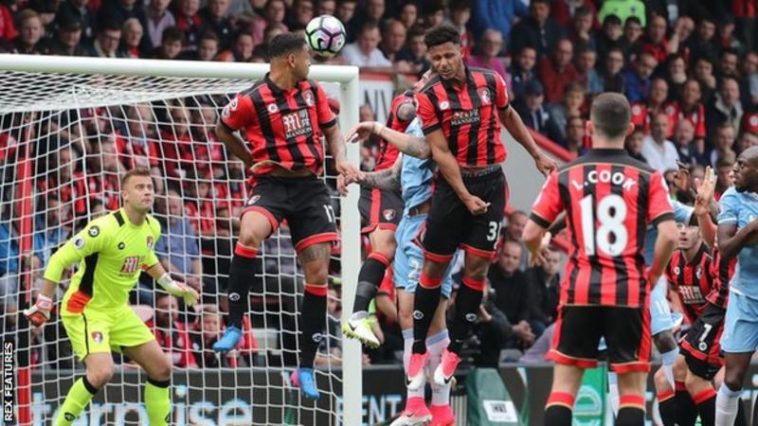 In an end of season game between two mid table sides the spoils were shared with a final score of 2-2.

Stoke made one significant change to their line-up with Mame Diouf starting up front in place of the ill Saido Berahino. Bournemouth opted to give youth a chance by starting youngster Lys Mousset.

Stoke arguably started the better of the two teams, moving the ball well in midfield mainly via the experienced Glenn Whelan. But no significant chances were created by the Potters as Bournemouth gradually grew into the game.

Not long after that the game went up a notch following a meaty challenge from Harry Arter. The Bournemouth midfielder connected with the ball but the challenge was certainly two-footed, high and out of control. Joe Allen, the recipient of the challenge is certainly lucky not to have been seriously injured. The referee opted for a yellow card which could be argued to be a lucky decision for Arter.

The pace of the game picked up and became more end to end and Stoke took full advantage. The opening goal came from a corner as Geoff Cameron looked to head the ball only for it to come off Young Mousett’s head. The youngster couldn’t do much about it so can hardly label it embarrassing. Stoke went in at half time 1-0 to the good.

Bournemouth clearly had a rousing team talk from Eddie Howe at half time and came out with much more attacking impetus. Stoke however did manage to defend fairly resolutely and threatened on the counter, with Marko Arnautovic missing a few decent chances.

But Bournemouth made good of their new found dominance and levelled the score through Junior Stanislas. Following some excellent passing, Adam Smith found a lot of room on the right-wing and burst forward. He hit a low cross into the area which was dummied by Josh King before finding its way to Stanislas who swept the ball home very competently.

Just 10 minutes later Stoke took the lead again. Some nice play between Shaqiri and Cameron down the right gave the USA international a chance to put in a floated cross. This cross was knocked down by Arnautovic to Diouf, who held off his man with great strength before a scrappy finsh put the ball past Boruc.

By this point both teams were going for the jugular and the game became very end to end with little regard for conceding.

It was Stoke who paid the price for this gung-ho approach as Bournemouth equalised for the second time on the day.

Another ball put into the box wasn’t cleared by Stoke allowing Josh King to take full advantage and poke the ball home. Replays show he in fact played it off Shawcross and the own goal was awarded to the Stoke captain..

Considering both sides didn’t have much to play for this was a surprisingly exciting game.

Both teams looked to attack and create chances and the game flowed very well. It could be argued that Stoke were the better side and simply didn’t take enough of their chances. But Bournemouth’s second half performance merited at least a draw.

If you support Bournemouth or Stoke City, and are an aspiring Football Writer, join our writing team.