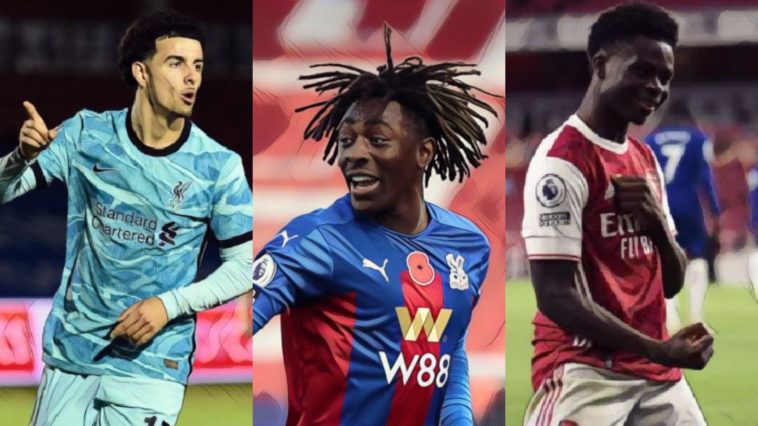 Premier League fans have been treated to some superb football during the opening months of the 2020/21 campaign and as we approach the halfway point we’ve decided to pick out some of the stars of the season so far.

This feature looks at some of the best young players to have made their mark in the Premier League during the current campaign, a host of prospects who have vindicated the faith shown in them by their respective managers.

Here are six of the best young players in the Premier League so far this season:

Arguably the shining light in what has been a dreadful start to the season for Arsenal, the north London side having endured their worst start to a campaign in more than half a century under Mikel Arteta.

Whilst the positivity surrounding the first months of Arteta’s reign has largely disappeared of late, Arsenal fans should remain optimistic with a clutch of precociously talented youngsters beginning to grow in confidence and stature at the Emirates.

Heading the next generation is Bukayo Saka, who burst onto the scene last season and has continued to thrive despite the poor performances of those around him.

The 19-year-old’s youthful exuberance has shone through and Saka has emerged as perhaps Arsenal’s most important player, a youngster willing to shoulder responsibility even during a difficult period for his side.

Only two players under the age of 21 have provided 10+ assists in a top-five European league + European competition since the start of last season:

Saka’s talent and versatility have underlined his status as one of England’s most promising players, a teenager who is comfortable in a variety of positions – a trait unlikely to be lost on Gareth Southgate as he plans his squad ahead of this summer’s European Championships.

Curtis Jones has enjoyed a rapid rise since announcing himself as a Liverpool player with a spectacular Merseyside derby winner almost a year ago, the teenage academy graduate’s match-winning intervention demonstrating his highly-rated talent.

Jones was rewarded with a handful of league appearances towards the season’s end to claim a Premier League winners’ medal, before becoming a fixture in Jurgen Klopp’s plans over the opening months of the 2020/21 season.

The summer departure of Adam Lallana and a host of injuries have handed Jones his opportunity, one he has seized in some style with a number of impressive performances – making 18 appearances in all competitions and scoring three goals.

Jones possesses a self-confidence not often seen from players with such little experience, his unwavering belief in his own ability having seen him make a seamless transition from youth level to the senior side.

Liverpool are currently stacked with midfielders but in Jones they have a player who provides a unique option, a youngster with intelligence, flair and the confidence to ghost forward in search of goals.

The 19-year-old compiled a fine goalscoring record at youth level and his ability in tight spaces around the penalty area has already been evident in the senior side, Jones having rarely looked out of place since his introduction into one of Europe’s best teams.

Wolves’ recruitment work in recent seasons has provided some brilliant business, with Nuno Espirito Santo having consolidated his side as a impressive Premier League outfit and delivered European football to Molineux for the first time in almost four decades.

After successive seventh-placed finishes the Portuguese has tweaked his side in a bid to further challenge England’s elite, introducing new players and even moving away from a preferred back three formation on occasion.

The changes have delivered mixed results but one of the main beneficiaries has been Pedro Neto, who has flourished during his second season in the Premier League after a period of adaptation last term.

Neto has found himself as the key figure amongst Wolves‘ attacking options and has taken on added responsibility following the injury to Raul Jimenez, his four goals and three assists this season already bettering his haul from the entirety of last season.

The Portuguese youngster is a brilliant footballer to watch as he glides across the pitch in a graceful manner, comfortable on either foot and capable of going past players with effortless ease.

Neto has featured from the left and centrally and has impacted games alongside compatriot Daniel Podence, the fleet-footed duo have transformed Wolves’ style as they look to continue their upward trajectory.

The 20-year-old’s performances will no doubt be attracting interest from elsewhere and Neto looks set to become the latest player nurtured at Wolves to move on to bigger things, a classy and creative talent with the potential to star at a higher level.

The best Portuguese players in the Premier League right now

Chelsea have handed opportunities to a host of academy graduates over the past 18 months, though Tariq Lamptey made the decision to leave the west Londoners in search of regular first-team football almost a year ago.

It is a decision that has reaped rewards Lamptey after announcing himself as one of the most exciting talents in the country at Brighton, whose £5m investment in the 20-year-old has already proved a bargain buy.

Lamptey’s prospects at Chelsea were blocked by the presence of Reece James – a player unfortunate to miss out on this feature – but the youngster has swiftly shown he has the talent to star at Premier League level.

Lamptey provides endless energy from right-back and has the pace and intelligence to impact the game when pushing forward, whilst his tenacity defensively has also won plaudits and reportedly attracted admiring glances from clubs such as Arsenal, Atletico Madrid and Bayern Munich.

Graham Potter’s faith in the starlet has been justified with a strong first half of the season and whilst the England U21 international appears in the right place to continue his development, there will no doubt be a long list of suitors interested in prising him away from the Amex Stadium before too long.

The most established name on this feature but a player who is somehow still just 21-years-old, Mason Mount has built on a promising first season in the Chelsea first team to cement himself as an indispensable figure under Frank Lampard.

Mount has had no shortage of detractors with many questioning his status for both club and country, though the midfielder has proven just why he is so highly regarded over the opening months of the campaign.

The England international has played predominantly from a midfield three this season and it is a position that has extracted the best from his talents, with the youngster ranking fourth for chances created and key passes in the Premier League this season.

Mount’s improving ability to influence games and tireless pressing play has made him fundamental to the Chelsea side, his performances having seen him emerge – ahead of several big money signings – amongst the most important players to Lampard’s plans.

Mason Mount now has the 4th most chances created in the Premier League this season (34), behind only De Bruyne, Fernandes and Grealish.

Started the season very well in midfield – looks even better in his natural position. pic.twitter.com/Zjnq6Ivt1K

Mount ranks first amongst Premier League players aged 21 or under for big chances created, shot creating actions, progressive passes and successful pressures, whilst his three assists is also the joint-most amongst players in that age bracket.

Chelsea remain a side in transition but have a number of young players in which to build around, Mount emerging as arguably the pick of their academy graduates.

Wilfried Zaha has shouldered Crystal Palace‘s attacking responsibility for several seasons and the summer window saw the Eagles look to alleviate some of the pressure on the Ivorian, securing the signing of Eberechi Eze from Queens Park Rangers for a fee of £17m.

Eze had sparkled in the second tier for QPR before making the move to their London rivals and the Premier League, where he has quickly found his feet as an exciting creative talent for Roy Hodgson’s side.

The 22-year-old possesses a showmanship style and effortlessly glides past players, whilst showing an ability to influence contests tangibly with two goals and two assists so far this season.

Eze scored a sensational solo goal in Crystal Palace’s win over Sheffield United this week as he waltzed past a succession of challenges and appears to be growing in confidence, the midfielder’s flawless close control and technique belonging at Premier League level.

After several seasons of being labelled a one-man team, Palace finally have a more than able supporting cast for the talismanic Zaha.