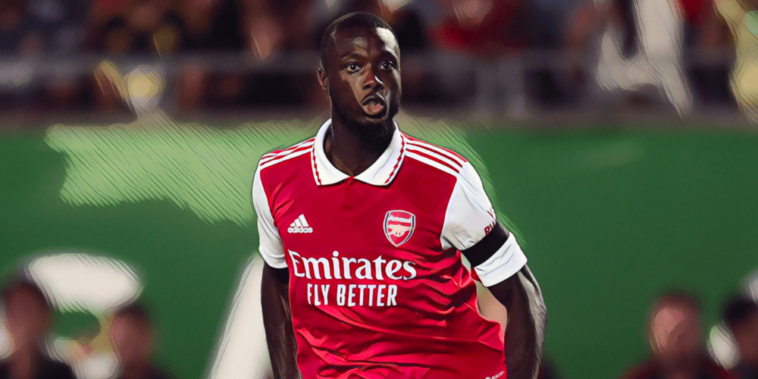 Mikel Arteta has discussed the decision to allow Nicolas Pepe to leave Arsenal on loan.

Pepe has completed a loan move to Nice after an underwhelming three seasons in north London, with the winger having failed to produce consistent performances since a £72m club-record arrival from Lille.

The 27-year-old made just five league starts last season and failed to make a Premier League appearance across the opening three fixtures of the season.

Speaking at his pre-match press conference ahead of this weekend’s clash with Fulham, Arteta has opened up on Pepe’s exit and believes a move was the best outcome for all parties.

“It’s been three years since he joined the club and he’s had some very good moments and somewhere he hasn’t contributed that much to the team in terms of minutes, and we have decided that for every party it was the best decision to allow him to go. He needs minutes and needs to play football, and was really adamant to do that, and we decided it was the best thing for everybody.”

Pepe arrived with a promising reputation after starring in Ligue 1, but managed just 27 goals in 112 appearances across all competitions for Arsenal.

Arteta praised Pepe’s attitude during a frustrating period for the winger and discussed whether he had struggled with the expectation of his record-breaking fee.

“I don’t know. I think Nico tried to deal with that the best possible way. Obviously, he’s not responsible for the price that a club pays for him. He tried everything, his attitude and the way he is is just phenomenal. You just have to meet the person and you will love him for the way he is.

“In terms of the decision we have to make on the pitch and what we have to select, we have made other decisions and obviously that has had an impact in terms of the chances he’s had to show his quality.”

Arteta refused to comment on whether the deal was the end of Pepe’s career with the club, but insisted the player had expressed a desire for increased opportunities.

“He needed minutes, he’s been craving for minutes, He talked to me a lot about it, I could not guarantee it right now, what he was looking for. And at some stage if you extend that period for too long, frustration comes in and the level of performance won’t be what we want so we decided it was the best thing to do.”

The Spaniard also spoke on Arsenal’s transfer business and whether the club would avoid the risk of big-money arrivals in future windows. Arteta admits it is difficult to predict how new arrivals will fare but insists Arsenal will always look to ‘minimise the risks as much as possible’.

“The club, and whoever decides to bring in players, wherever I’ve been involved in the past, has always been with the best intentions, because we’ve believed and they’ve believed at the time it was the best player to get in the market and have an impact for the club. Sometimes it’s not that easy and you see that everywhere – that you get a top, top player [at a different club] and suddenly it doesn’t work.

“This industry is very complicated. We try to minimise the risks as much as possible – but at the end of the day, they are not machines, they are human beings and they need all the factors to go right to fulfil their potential.”