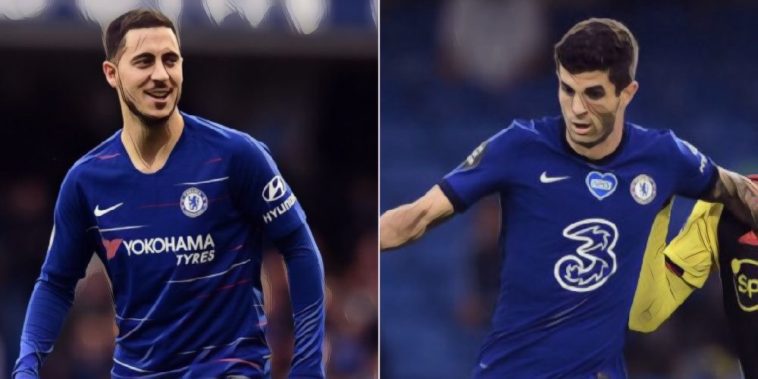 Christian Pulisic has certainly hit the ground running since the Premier League restart, with a number of fans and pundits drawing comparisons to former Chelsea attacker, Eden Hazard.

It’s easy to see where such comparisons come from, both players enjoying playing on the left, possessing a low centre of gravity, ability to carry the ball, beat a man and score goals.

The USA international had a slow introduction to life in the Premier League, though more recently has developed into an integral part of Frank Lampard’s young Chelsea side, netting eight times in all competitions and providing six assists, while his direct surge into the Watford penalty area at the weekend earned his side a penalty.

Having played alongside Hazard, and worked with Pulisic, Frank Lampard has opened up on the comparisons, and differences, between the two players.

“Eden had a special talent straightaway of being able to receive the ball, show great balance and go past players,” Lampard told the media via video call for his pre-match press conference. “He would draw a lot of players towards him to open up space for others. He was pretty unselfish with making assists that way.

“Christian is possibly more direct in his style sometimes, in terms of how he goes past players and runs off the ball, which I like. He has a real ability to break a line and run forward. That’s a great trait in the modern game.

“Eden has been here and done it, and did it to an incredible level. Christian has it in his hands to make a real impact over a period of time. The thing I’m so happy with now is when we’re finding it hard to break teams down, he is taking responsibility to change that. It’s been great to see.”

Chelsea continue in their pursuit of Champions League football on Tuesday night, taking a short journey across London to face a Crystal Palace side who are without a win, or a goal, in their last three outings.