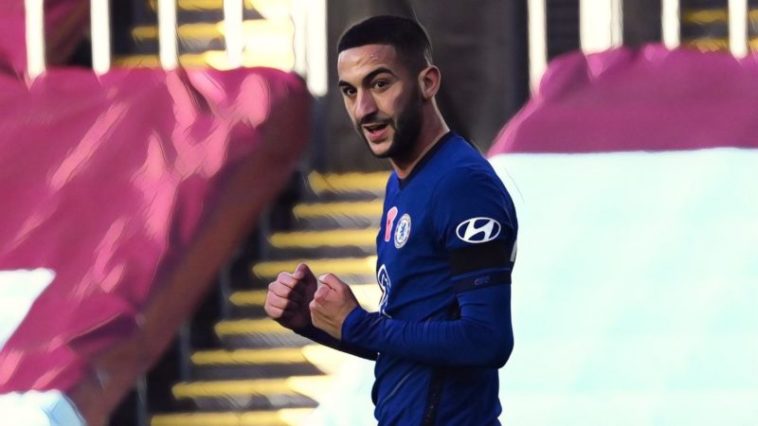 Hakim Ziyech has quickly emerged as a fans’ favourite at Chelsea following his superb showings since signing from Ajax during the summer, the silky schemer quickly establishing himself amongst the Premier League’s finest creators.

The Moroccan international has scored twice and provided a further three assists in just four starts for the west London side, his sensational delivery from the flanks adding another dangerous weapon to Chelsea’s attacking options.

Ziyech has become the first Moroccan to represent Chelsea, though he is not the first of his compatriots to have made an impact in English football.

Here are five of the best Moroccan footballers in Premier League history:

Mustapha Hadji’s club-record arrival at Coventry City in the late nineties prompted fezzes to become a regular part of supporter’s attire when attending Highfield Road, the Moroccan midfielder signing from Deportivo La Coruna a year after impressing at the 1998 World Cup.

That summer had seen Hadji finish ahead of Jay-Jay Okocha to be named as African Footballer of the Year and he arrived at Coventry regarded as an exciting talent, an attacking midfielder possessing both pace and trickery.

He made 62 appearances for the Sky Blues and scored 12 goals, though was unable to prevent the club slipping out of the Premier League in 2001.

Hadji – who scored twice in the 3-2 defeat to Aston Villa which confirmed Coventry’s relegation – had impressed their Midlands rivals sufficiently to attract transfer interest and moved to Villa Park that summer.

His spell with Aston Villa proved rather unhappier, however, as he struggled to command an automatic place, making just 35 league appearances over three seasons before being released on a free transfer.

Wasted talent and gifted genius are just two of the polarising opinions that have been levelled in the direction of Adel Taarabt, a mercurially talented midfielder who for a short time wowed in English football.

After failing to make an impact at Tottenham he dropped into the second tier at QPR, his arrival proving the catalyst behind the club’s return to the Premier League for the first time in nearly two decades, Taarabt head and shoulders above the rest of the Championship during a sensational 2010/11 season.

The Moroccan was a player who simply refused to conform when stepping onto the pitch, tormenting defenders with tricks and flicks and producing jaw-dropping moments of skill that left fans bewildered.

He may never have provided his managers with tactical discipline but he was most certainly an entertainer and one that deserves celebrating, regardless of whether his Premier League contributions were rather more underwhelming.

Amongst his highlights, however, was this delightful double against Fulham, his second a fine effort as picks the ball up just inside the opposition half before driving towards goal, rolling the ball across his body before a nonchalant outside-of-the-foot finish into the bottom corner.

Six of the most exciting teenagers in European Football right now

The signing of Marouane Chamakh was viewed as coup for Arsene Wenger after he secured the player on a free transfer from Bordeaux, the Moroccan international having enjoyed eight successful seasons with the French side, including Ligue 1 success in 2009.

Chamakh had compiled a decent goalscoring record and initially began brightly in north London, his threat in the air providing Arsenal with a different dimension as he scored 11 goals in all competitions during his debut season.

That record came despite appearing largely as a substitute and it was a role he would become accustomed to, falling out-of-favour during a second season that delivered just one league goal.

The forward swiftly became a much-maligned figure courtesy of his toils and failed to truly reignite his career upon leaving the Emirates, spending loan spells at West Ham and Crystal Palace before signing a permanent deal with the latter.

He spent three seasons with the Eagles and briefly threatened a renaissance before a short stint at Cardiff before retirement.

Sofiane Boufal may never quite have reached the heights expected after completing a club-record move to Southampton in 2016, but he most certainly followed in a long line of his compatriots who had the ability to produce magical moments.

Boufal frustrated for much of his time in the Premier League but is a wide player with fantastic dribbling ability, capable of ghosting past players with ease and scoring spectacular efforts.

None more so than this stunning solo slalom against West Bromwich Albion, an individual piece of brilliance which in itself is enough to warrant his inclusion on this list.

His feints and changes of direction carry him past a succession of challenges, including one memorable moment as his trickery leads to two West Brom defenders comically crashing into each other.

It was the highlight of a spell with Southampton that delivered just three goals in 70 appearances, his evident talent not showcased enough on a consistent basis.

Hakim Ziyech’s stunning start at Chelsea is more than enough to see the winger walk into this list, the fleet-footed star a player who looks capable of making a huge impact at Stamford Bridge.

Ziyech arrived into the Premier League with a burgeoning reputation following his success at Ajax, winning a domestic double in 2018/19 and registering 130 goal involvements in just 165 appearances for the Amsterdam outfit.

Those creative qualities have already been showcased with five goal involvements in just four starts for Chelsea, his six chances created against Sheffield United last weekend the joint-highest any player has managed in a Premier League game so far this season.

The 27-year-old plays predominantly from the right flank and cuts inside to devastating effect on his stronger left foot, whipping in dangerous deliveries or going direct to goal with his long-range shooting.

Chelsea have a special player on their hands and the summer signing could prove decisive in their bid to challenge for major honours this season, Ziyech already looking like the finest Moroccan import the Premier League has seen.

Read – Unproductive: Ranking the five most wasteful sides in front of goal so far this season