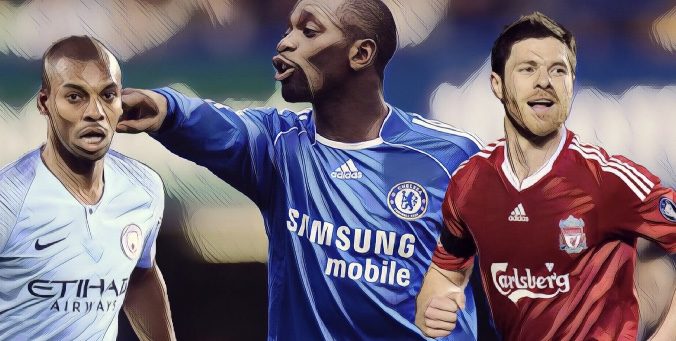 The holding midfield position is one that has grown in importance in modern football, having previously often been undervalued and under-appreciated. So often unsung heroes in the past, the position is now celebrated like never before.

French great Claude Makelele was perhaps the game changer in the perception of the role’s importance, the position often coined the ‘Makelele-role’. As midfield three’s became more common, the heart of each successful side in the modern-era has seen a specialised defensive midfield screen.

The Premier League has seen some great defensive midfield players during its 27-year history, here are six of the best…

Perhaps unfair to label the Manchester United great as simply a holding player, with the Irishman a relentless box-to-box presence in his younger years.

As Keane aged, however, his defensive nous became vital as United continued to dominate English football. Fiercely competitive and strong in the challenge, Keane struck fear into midfield opponents with his sheer desire to win.

Capable of winning the ball back, an aggressor of opponents and a much better passer than he is often given credit for, Keane’s attributes were perfectly suited to the holding role as modern football began to change around him.

Few players have embodied the heartbeat of a side as much as the former United captain, who’s extensive collection of silverware will see him forever remembered as a Premier League great.

An often underrated presence in a successful era for Arsene Wenger’s Arsenal, Gilberto Silva arrived in North London having helped Brazil to success at the 2002 World Cup.

The screen which allowed the likes of Rivaldo, Ronaldinho and Ronaldo to flourish for the national team, Wenger brought the midfielder to the Premier League to partner Patrick Vieira in midfield.

Over six seasons with Arsenal, Silva won one Premier League title and two FA Cups, playing a vital part of the club’s famed ‘Invincibles’ season of 2003/04.

Often called the ‘invisible wall’ in Brazil, Silva would captain the club in the absence of Thierry Henry and would leave in 2008 having made 170 Premier League appearances.

So good that the position is often named after the Frenchman, Makelele was a pioneer in modern football appreciating the importance of the holding midfielder.

“Why put another layer of gold paint on the Bentley when you’re losing the entire engine?”.

The Spanish side’s loss was Chelsea‘s gain, with the midfielder becoming a key component as Jose Mourinho’s side won back-to-back Premier League titles in 2005 and 2006.

Hard-working, tenacious and combative, Makelele would win five major honours in as many seasons at Stamford Bridge, cementing his reputation as one of the finest holding midfielders of all-time.

A holding midfielder, but one who differs greatly in style to others on this list. Liverpool signed the young Spaniard in 2004 as Rafael Benitez’s Anfield reign began, with Alonso leaving five years later as one of the world’s finest midfield players.

Sitting at the base of midfield, Alonso had a passing range that few could match, managing to exert control and influence by dictating the play.

Rather than physical attributes, Alonso’s tactical intelligence and ability to read the game made him the perfect defensive foil alongside the likes of Steven Gerrard, with his departure to Real Madrid a catastrophic blow to a Liverpool side who had begun to challenge.

A holding midfielder with the ability to create, the former Real Madrid and Bayern Munich star is recognised as a modern great of the deep-lying playmaker role.

Read: 20 of the best quotes about midfield magician Xabi Alonso

A vital component of Pep Guardiola’s all-conquering Manchester City side, Fernandinho provides the platform that allows the attacking talents at the Etihad to flourish.

A capable contributor defensively, in transitions and in attack, the Brazilian international has been a huge Guardiola favourite during the Spaniard’s time in Manchester.

Quick, intelligent and versatile, Fernandinho has become a fan’s favourite during his time in the Premier League with his ability to cover every blade of grass adored by the City support.

He may not grab the headlines like some of his more illustrious teammates, but fewer players have been as important to the success of possibly the Premier League’s greatest ever team.

Has a holding midfield player ever been as popular at Chelsea’s unassuming Frenchman?

Having played a key role in Leicester’s shock Premier League triumph in 2016, Kante left for Chelsea where he was named PFA Player of the Year in another title win in his debut season.

A key component as World Cup success followed in 2018, Kante cementing his reputation as arguably the finest holding midfield player in world football on the international stage.

Kante, quite simply, appears to be everywhere. Relentlessly hard-working, tireless and comfortable in possession, the diminutive midfielder possesses all the attributes of the modern-day holding player.

Read: 10 of the best quotes about N’Golo Kante