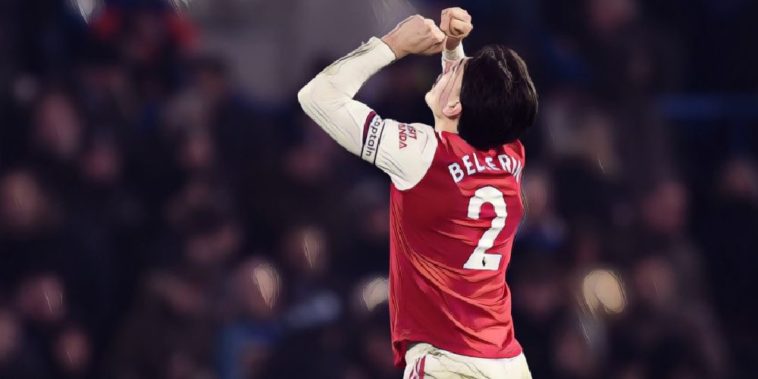 Hector Bellerin has hailed Arsenal’s ‘teamwork’ after the 10-man Gunners twice came from behind to earn a 2-2 draw at Chelsea.

The Gunners looked set for a difficult evening during a pulsating London derby clash at Stamford Bridge, David Luiz conceding a first-half penalty and being sent off against his former side after clumsily bringing down Tammy Abraham in the box.

Jorginho converted from the spot for Chelsea to put Frank Lampard’s side in control, but despite dominating possession the hosts failed to make the most of their man advantage as Arsenal levelled through Gabriel Martinelli, the teenager racing clear to score his 10th goal of the season following an unfortunate slip from N’Golo Kante.

Chelsea thought they had won it after Cesar Azpilicueta turned home Callum Hudson-Odoi’s cross late on, though Arsenal would come back once more as Bellerin rescued a precious point by firing home an equaliser with just three minutes remaining.

Stand-in captain Bellerin was full of praise for his side following their battling performance, hailing the Gunners’ ‘teamwork’ as they fought back in a spirited display.

“Everything is due to the teamwork,” Bellerin told BT Sport. “It was a really hard game with 10 men and losing a very important player for us.

Kepa Arrizabalaga faced 2 shots on goal against Arsenal tonight, both of them found the back of the net.

“We turned it around. We were 1-0 down at half-time and saw it as an opportunity to get back into the game.

“We are a team that are always looking to improve, to defend together and to not give up. Gabriel Martinelli took it really well. He was very calm. He finished it really well. That is why we practise in training every day.”

Bellerin, captaining the side in the absence of the suspended Pierre-Emerick Aubameyang, was named as Man of the Match following his late equaliser, the defender rifling home a rare goal with his weaker foot to secure a dramatic draw.

Teammate Granit Xhaka was asked to present the Man of the Match award to Bellerin following the full-time whistle, and Swiss international joked: “I didn’t know he had a good left foot!”

Bellerin was quick to respond, joking his weaker side had improved following his long lay-off through injury: “It’s good after the operation, no?”

“We played very well after the red card. So difficult, but we showed great team spirit,” Xhaka said. “We were speaking at half time that we can do it and we came twice back so I am very proud of this team.

“After this game nobody will have to speak about us. We showed big character. A lot of people say we have no character in the team, so after this game we showed we have.

“I hope centre-back is not my new position, but the gaffer knows I can play there. I tried to help the team, and the guys around me made it easy for me today.”

The draw leaves Arsenal in tenth and they remain ten points behind Chelsea in the race to secure Champions League football, Arteta’s side returning to action when they travel to face Bournemouth in the FA Cup fourth round this weekend.