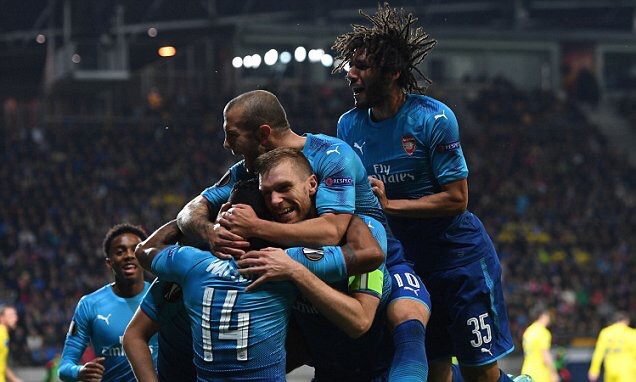 Arsenal were 4-2 winners against Europa League opponents BATE Borisov and they top Group H with two wins from two games.

Arsenal knew they would face a tough test in their first encounter against BATE Borisov. The Belarusian side have lost just one of their last 12 home games in all European competition. Before this match, they were on a seven-game unbeaten home run.

Theo Walcott had the first chance of the night for the away side when Jack Wilshere slotted a pass into his path but his shot, with the outside of his right foot, hit the post and went out for a corner.

Just two minutes later the same two players combined and this time Walcott scored. Wilshere played a one-two with Olivier Giroud then put in a pinpoint cross for Walcott. His header was saved initially but Walcott was able to get to the rebound and put Arsenal in front.

Arsenal’s next goal was simply handed to them on a plate. BATE’s goalkeeper, Denis Scherbitski, passed the ball straight to Walcott who couldn’t believe his luck and scored with ease to double Arsenal’s lead. It was a terrible error from the BATE keeper and it was punished accordingly.

Arsenal got a corner which was taken by Walcott, headed on by Per Mertesacker and put into the back of the net by Rob Holding, from a few yards out, for his first Arsenal goal. After 26 minutes, Arsenal were cruising.

The saying goes that teams are most vulnerable just after they’ve scored and this proved to be the case for Arsenal. BATE got a goal back thanks to an excellent header into the roof of the net from Mirko Ivanic.

Suddenly Arsenal’s lead didn’t look as comfortable as BATE grew into the game and David Ospina had to be alert and make a superb one-handed save to deny BATE a second goal.

Rob Holding nearly had his second goal for Arsenal from another corner but he swung at the ball and smashed his shot off the post.

Three minutes into the second half, Arsenal restored their three-goal lead. The Gunners were awarded a rather dubious penalty which was supposedly given for holding in the box. Olivier Giroud slotted home from the penalty spot to score his 100th goal for Arsenal. The Frenchman becomes the 19th player to score a century for the North London side.

BATE got their second goal in the 67th minute after comical defending from Arsenal who failed to clear their lines. Rob Holding slipped as the cross came in. Then Ospina saved Ivanic’s header but palmed it straight into the path of Mikhail Gordeichuk who thumped home from close range.

The home side had another good chance when Gordeichuk cut the ball back for Aleksandr Volodko whose shot was high and wide. Arsenal’s defence was looking shaky to say the least.

Giroud had a chance to restore Arsenal’s three-goal lead once again but his lob on goal landed on the roof of the net.

Despite the shaky end to the game, Arsenal managed to win 4-2 away in Belarus, with a weakened side and several youngsters and they are top of Group H with six points.