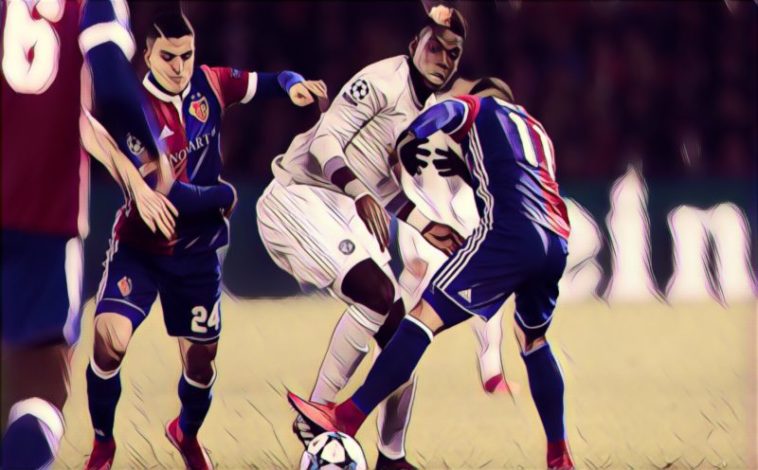 Despite the disappointing nature of Manchester United’s 1-0 loss away to Basle last night in the Champions League, The Reds are still well placed to finish top of their group going into match day six. Now the dust has settled a little bit it’s time to see what positives and negatives can be taken away from the game …

United absolutely dominated the first-half of this encounter without even breaking a sweat and should have been out of sight at the end of the first 45 minutes. Despite all the criticism Jose Mourinho receives in regards to his record with young players this is a very youthful Reds side.

Instead of staying patient, and waiting for their goal to come, United’s midfield became complacent in the second half and lost their tactical shape as the pushed forward. This in turn left their defence badly exposed – especially during transitional phases. Ultimately this naivety allowed Basle to grow in confidence and they punished United in the end when right wing-back Michael Lang snuck in at the back post to score a 89th minute winner.

Pogba is this side’s creative spark

During his 65 minutes on the pitch last night Paul Pogba showed us why United paid a world-record transfer fee to take him back to Old Trafford last summer. The France international gave a passing masterclass at times; there were long range diagonals, delicate through balls and flicks around the corner into his team-mates runs.

This is not to mention the strength and power he showed that made it look as if he was the biggest kid in the playground just teasing those around him. Jose Mourinho was right to take the midfielder off early as he eases his way back from a long-term muscle injury, but United barely created a chance once he left the pitch.

Mourinho will also be encouraged by the return to the starting XI of Argentina international Marcos Rojo. The 27-year-old showed no signs of rustiness on his return from long-term injury and his level of aggression in the challenge was impressive throughout.

Rojo went close to making a sensational return in the first-half when he cracked a 45-yard-strike off the crossbar, and made one goal saving block on Basle forward Oberlin. As we enter the hectic christmas period Mourinho will be delighted to have defender back to full form and fitness.

Several players who have not started many games this season where given a chance to impress in Switzerland last night, and in all honesty, they all failed miserably. Both full-backs Matteo Darmian and Daley Blind looked nervy in defence and the home sides confidence grew as they got more and more joy down each flank. Neither of Ashley Young or Antonio Valencia will be too worried about losing their place from Mourinho’s first choice XI after their replacements performance.

Jesse Lingard started on the right of a front three and did absolutely nothing for the entire game. The 24-year-old England international is obviously a popular member of this United squad, but on nights like last night, its hard to argue against those who say he is nowhere near good enough to be playing for a club of this size.

St Jakob Park is a graveyard for English teams

At half-time last night it was hard to foresee anything but a comfortable Man United win. Basle however, came out in the second-half a completely different team and with the raucous home crowd behind them they ultimately won the game, but the thing is nobody should really have been surprised.

The 20 time Swiss Super League Champions have now beaten United three times at their famous St Jakob Park stadium. In fact it is not just a bogey ground for the Old Trafford club, but also for other Premier League giants with Liverpool, Chelsea and Spurs all having succumbed to defeat there in European competition over the last decade.