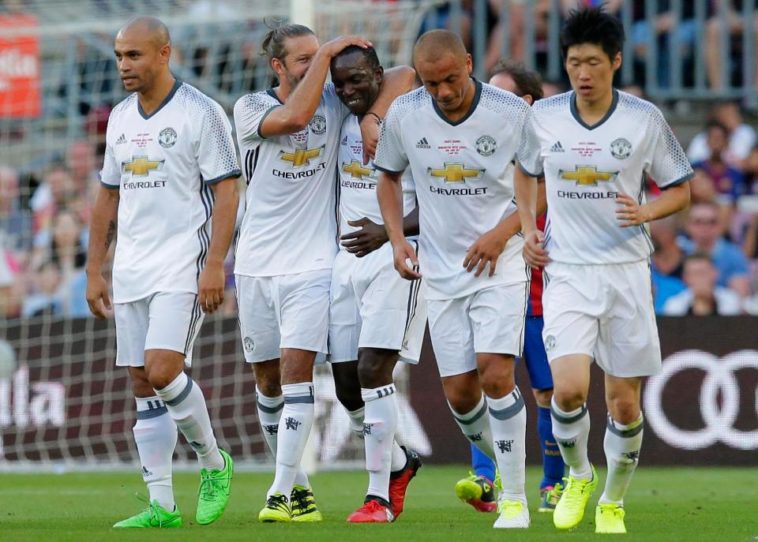 Jasper Blomqvist, Karel Poborsky and Dwight Yorke thwarted the plan for a perfect return to the Nou Camp for Ronaldinho, Patrick Kluivert and Rivaldo.

Manchester United legends had a throwback to 1999 as they put in a simple but effective performance against a Barcelona side who on paper looked certain to take a lead into the second leg at Old Trafford.

Blomqvist opened the scoring after trading passes with Dwight Yorke who saw his shot cleared off the line before the Swedish winger converted from the rebound.

Barcelona then took control of the game without really threatening the United goal. Ludovic Giuly, Edgar Davids and Ronaldinho all had efforts without troubling Raimond Van Der Gouw.

Ronaldinho rolled back the years with some silky skills which led to roars from the Barca faithful. However, dominant defending from United was starting to frustrate the 50,000 in attendance.

The Red Devils then doubled their lead as a Karel Poborsky shot deflected past Jesus Angoy after an excellent run from Park Ji-Sung.

Rivaldo came closest for Barcelona with a free kick which United substitute Karl Pilkington expertly tipped past the post.

The special moment of the game however, game when Dwight Yorke picked up the ball on the edge of the box, lifted his head and curled his effort in off the post.

French centre back Frédéric Dehu gave Barcelona fans something to cheer about after running through the United defense and slotting the ball past Pilkington with the last kick of the game.

The legends faced off in aid of the Pediatric Cancer Centre at Hospital Sant Joan de Deu in Barcelona and will meet again on September 2 at Old Trafford.