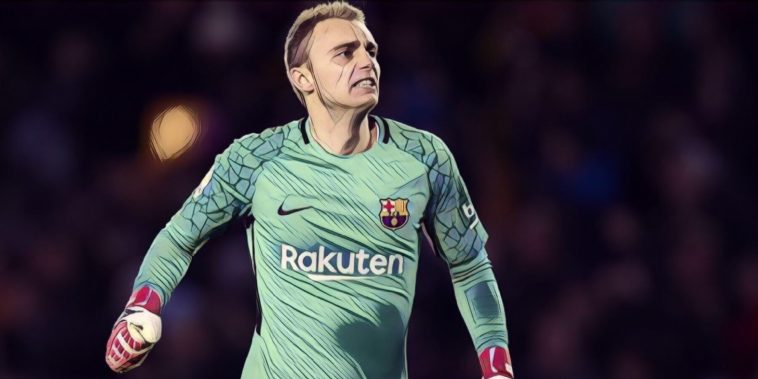 Barcelona goal keeper Jasper Cillessen has hinted that he would be open to moving to a Premier League club this summer.

Holland international Cillessen was heavily linked with a move to Man United during the Louis van Gaal era, and is rumoured to currently be a target of both Arsenal and Liverpool, with both clubs looking to sign a new number one.

The 29-year-old shot stopper moved to the Nou Camp in the summer of 2016 from Dutch side Ajax, but he has struggled to dislodge the highly rated Marc-Andre ter Stegen in the Barca starting XI.

During last season Cillessen was only selected for Spanish Cup games, and he has revealed that while he does not expect the current La Liga Champions to allow him leave Catalonia on a permanent deal, a loan deal to Arsenal or Liverpool may be on the cards.

“I think that I played well in the matches I had in the Copa del Rey,” Cillessen told Fox Sports.

“I need to wait patiently. The only thing I know is that Barcelona won’t sell me.

“Arsenal and Liverpool aren’t bad clubs but if Barcelona say, ‘We love you’, then I’ll accept their decision and continue there. I’ll wait until we return on the 16th July to see what they’ve decided. I don’t know anything. If the club wants to keep me, I’ll accept that. I signed a five-year deal with them.”

Chelsea are also said to be monitoring Cillessen’s situation, with the Stamford Bridge club keeping an eye out for a new ‘keeper due to Thibaut Courtois’ ongoing contract stand off with the London club.