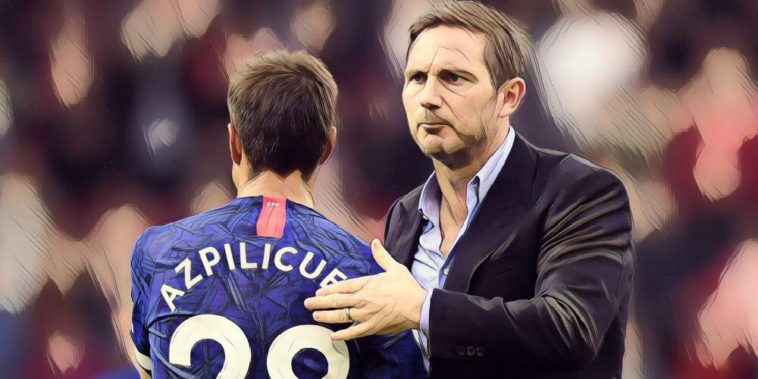 Cesar Azpilicueta has outlined Chelsea’s need to be ‘clinical in both boxes’ as the club look to build on Frank Lampard’s first season in charge.

Chelsea enjoyed a promising campaign under the guidance of former fans’ favourite Lampard this season, securing a top four finish and Champions League qualification in addition to reaching the FA Cup final.

The west London outfit, however, largely struggled for consistency and their defensive woes will come as a major concern ahead of the new campaign, the Blues conceding more goals than any other side in the top half of the Premier League and suffering a humbling 7-1 aggregate defeat to Bayern Munich in the Champions League last 16.

Azpilicueta was almost an ever-present once more in an era of transition at Stamford Bridge, and the club captain has now reflected on his side’s season and the progress they must make if they are to challenge for major honours.

“When you look at the end of our season, they were not the results we wanted to get,” he told the official Chelsea website. “We missed the chance to lift a trophy and obviously we had a bad result against Bayern as well.

“We had our good moments during the season and our difficult moments as well but we couldn’t find that consistency to have better results. We know that as a team we have to keep improving and we are all looking forward to working hard from the beginning of pre-season to be ready for the next one.

“We started with a new manager this pre-season and with a different style of play, which obviously we all tried to implement from the beginning. We know it’s still just the beginning and we have to keep improving as a team.

“We have had very good games against big teams in which we have performed very well but then sometimes we didn’t find a way to win games even when we were not playing that good. That’s the consistency that we need as a team.

“It has been very difficult for us to find defensive solidity but once we do that, I can only see the team growing and improving moving forward.”

Azpilicueta discussed his side’s disappointing defensive record this season and says Chelsea must improve if they are to bridge the gap to the likes of Liverpool and Manchester City, urging his side to be more clinical at both ends of the pitch.

“The story of a lot of games this season has been that we were not clinical in the boxes,” Azpilicueta added. “In the attacking box, we have missed chances but I think the big problem was that sometimes we were playing well but we were not strong enough in our box.

“I always think of the offensive and defensive phases as a team and as a unit we know we have to keep improving at the back. We have to reduce the numbers of goals conceded if we want to close the gap because it’s a big difference. I’m sure we will work hard to reduce the gap and be close to the top next season.”