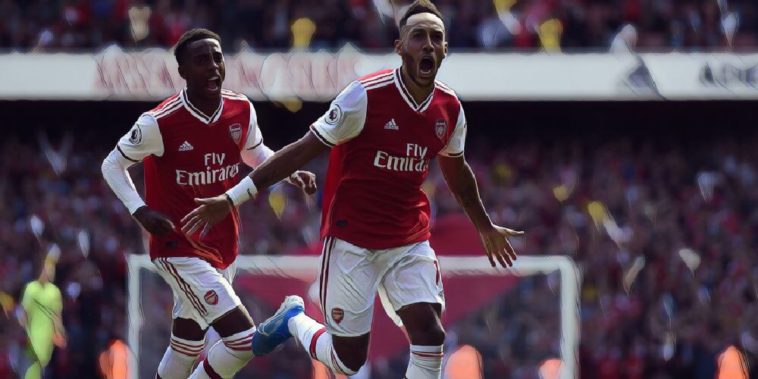 Pierre-Emerick Aubameyang has said he ‘feels sure’ that Arsenal will be challenging for a place in the top four following their 2-1 win over Burnley this afternoon.

Arsenal took the lead through Alexandre Lacazette, who wriggled away from Erik Pieters to squirm the ball through the legs of Nick Pope in the Burnley goal.

The Clarets went into the break level after some sloppy defending from the hosts, with Ashley Barnes netting his third strike of the season.

However, the points were secured by last season’s golden boot winner Pierre-Emerick Aubameyang, who expertly tucked the ball into the Burnley net after Dani Ceballos had done well to win the ball in midfield.

Speaking after the game, the match-winning striker said he felt ‘sure’ that the Gunners would be challenging for a place in the top four.

“I think we started well today, and that’s good to start like this with two wins before we go to Liverpool,” Aubameyang told BT Sport.

“We feel confident, we feel good. That was important because we played at home, so I’m happy today.”

“I think we feel stronger. We have players like David [Luiz], Dani Ceballos, [Nicolas] Pepe, they came here and now we feel strong, and I feel sure that we can fight for the top four.”