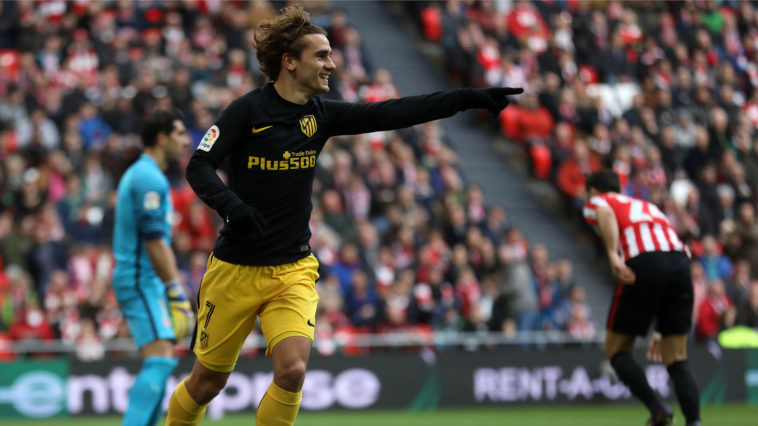 Atlético failed to pick up a vital three points at San Mamés, with French star Antoine Griezmann scoring a rocket to salvage a point.

Athletic were missing arguably their two most crucial players in Beñat and forward Aritz Aduriz who were both out due to suspension after appeals were turned down.

It was the away side who got off to the perfect start as in just the second minute as a cross from Koke inot a dangerous area, travelled all the way into the back of the net. He had Griezmann to thank for dummying the ball on the way through.

The performance seemed to have not slipped since the 3-0 win over Eibar on Thursday, as Atleti got off to a great start, however, it was evident that the eleven playing were exhausted from the Copa Del Rey tie.

A sign of Carrasco’s poor form continued as he got on the end of an Antoine Griezmann ball, and the Belgian went on the outside of the opposing defender and sprayed his shot wide.

Athletic Bilbao were taking a grip on the game, and five minutes before half-time, Iñigo Lekue powered his shot beyond Moyá from outside the box to make it 1-1.

After the break, it was more of the same from Athletic Club. Atleti were punished for sitting off as Godín made an irrational fourty yard run. Athletic countered and former Atleti man Raúl García crisked the ball to Oscar de Marcos, who met the ball to score with a commanding header. Moyá in the Atletico goal was left for dead for the second time and it was 2-1 to the hosts.

Atleti go for it

Correa has seemed to always make an impact off the bench, and although he was very good again, he failed to get Atlético the important equaliser they were loolong for, as his shot  fizzed wide of the right-hand post.

Griezmann looked like he had scored arguably his best goal in an Atleti shirt as he latched on to a through pass. He exquisitely dinked the ball over Iraizoz from a narrow-angle outside the eighteen-yard box, however, the linesman wrongly chalked the goal off.

However, the Frenchman dis manage to level the game up. He dummied past one defender, before driving a powerful, swerving shot from thirty yards. The strike hit the inside of post and into the back of the net. A fine goal.

Although both parties will feel a point was the correct result, Atlético will feel as though they dropped two points in this ever so competitive race for the top four.