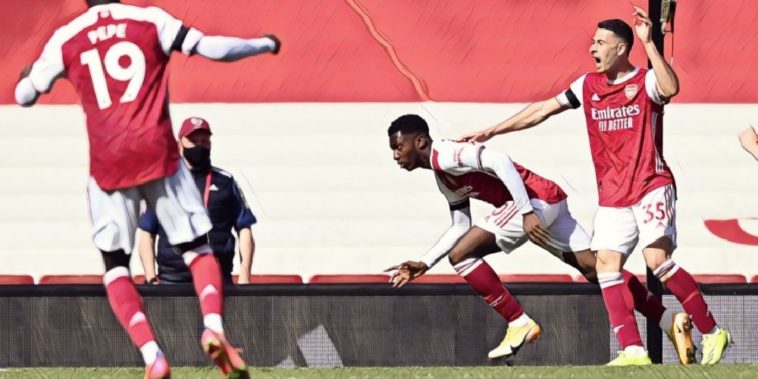 Eddie Nketiah came off the bench to salvage a late point for Arsenal as Fulham suffered more heartache in their battle to beat the drop.

After their impressive 4-0 win in the Czech Republic in midweek, Arsenal started brightly against Fulham and could have gone ahead in the first minute as Gabriel Martinelli’s attempted dink over Alphonse Areola dropped narrowly wide before the French ‘keeper also made a low save to deny the Brazilian a few minutes later following an Emile Smith Rowe cut back from the byline.

After being pinned back firmly in their own half for the opening 20 minutes, Fulham began to get a foothold in the game, and would come agonisingly close to opening the scoring, Josh Maja’s effort deflected off Gabriel Magalhaes before trickling agonisingly wide of Mat Ryan’s goal.

Arsenal thought they had taken the lead five minutes before the break, Dani Ceballos producing a powerful header from a clipped Hector Bellerin cross, only for it to be ruled out for a marginal offside by Bukayo Saka in the buildup.

The Premier League strugglers would then be awarded a penalty 13 minutes into the second half, Mario Lemina being trodden on by Gabriel, and after a bit of a VAR review, Maja stepped up and blasted the ball into the roof of the net.

Unsurprisingly, the Cottagers would look to defend their lead, and had Tosin Adarabioyo to thank for clearing off the line after Areola had saved from Nicolas Pepe, while the ‘keeper would once again deny Martinelli as the game ticked towards added time.

Gabriel Martinelli completed more take-ons (4/4) and had more shots (4) than any other player against Fulham.

He also completed 91% of his passes and created two chances. pic.twitter.com/hHuPHg7Yy9

The Gunners would however snatch a 97th minute equaliser, Ceballos’ strike following a Saka corner being kept out by Areola, though his parry was pounced upon by Eddie Nketiah to nab a late point – the goal awarded with Rob Holding deemed not to be interfering with play after being in an offside position from the Spaniard’s initial effort.

Speaking afterwards, Mikel Artera was pleased with the ‘desire’ to grab a late equaliser, but admitted his side put themselves in a ‘difficult position’ with their wastefulness in front of goal.

“We started really well, controlling the game and creating chances, scoring a goal that was disallowed, in a very disappointing way, we kept going and didn’t allow any shots on target and suddenly we concede a penalty and the game changes completely,” he told Sky Sports.

“We took risks in the right way, we could have scored three or four, we totally deserved to win the match but put ourselves in a difficult position.

“We have to just focus on the boys playing away in Europe and arriving here with the desire to go all the way to the 97th, 98th minute.

“We had 16 shots, probably not enough on target, goals disallowed, a post, that is the difference, you have to win this game.”

Arsenal suffered a blow midway through the second half as in-form striker Alexandre Lacazette had to be withdrawn after pulling up with a hamstring injury, although he was replaced by goalscorer, Nketiah.

“He felt his hamstring so we don’t know [how bad it is]. We have to rotate players, we have players who didn’t recover from the game on Thursday. That is the risk. You cannot change those players every game.”

Where next for the soul-sapping sociopath Mourinho when Spurs finally see sense?