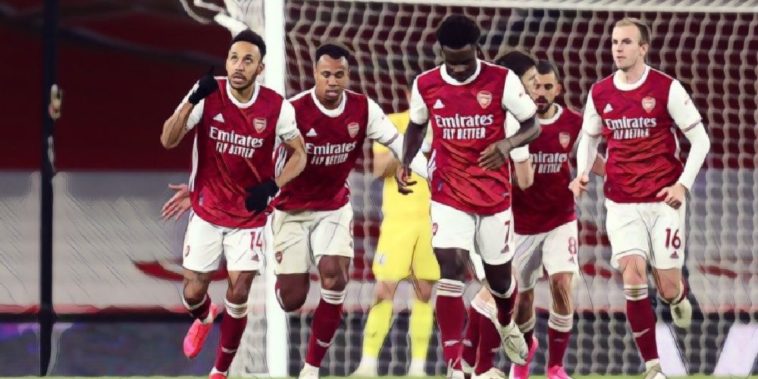 Mikel Arteta admitted he was pleased with Arsenal’s resilient second-half showing after the Gunners earned a 1-1 draw with high-flying Southampton despite going down to 10 men for the second successive Premier League game.

The North London club have suffered a wretched run of form of late after having failed to pick up a league win since their impressive victory over Manchester United at the start of November and came into the game with four consecutive home defeats.

However, things got off to a poor start after former Gunners star Theo Walcott opened the scoring for the visitors, the former England international latching on to a fine Che Adams through ball before dinking a delightful effort over the onrushing Bernd Leno to pile more misery on under-pressure manager, Arteta.

Fortunately for the Spaniard, his side were able to find a way back into the match early in the second-half, after Pierre-Emerick Aubameyang ending his goal drought with a cooly taken curling finish following a fine run from young Bukayo Saka, the Arsenal captain making up for his own goal in the 1-0 defeat to Burnley at the weekend.

The game then looked to have taken a major turn when summer signing Gabriel was sent off for a second bookable offence with 30 minutes still to play, the Brazilian having been adjudged to have pulled down goalscorer Walcott just inside his own half. Despite suffering another red card following Granit Xhaka’s foolish dismissal on Sunday, the Gunners managed to hang on for a hard-fought draw, with Arteta revealing after the game that he was relatively pleased with the point, particularly after seeing his side go down to 10 men.

AUBAMEYANG GETS HIS GOAL!

“Considering the fact that we played 35 mins with ten men we have to take the point because we showed some resilience and character to hang in there for so long against a really dangerous team,” he said at his post-match press conference.

“But at the same time really disappointed because we came back after conceding the goal. We showed how much we want it, we created some situations and after half time we corrected a few things, we came back really strong in the game scored a good goal. But when we have the best moment again we shoot ourselves in the foot.

While their will once again be questions asked of Arsenal’s disciplinary issues following Gabriel’s red card – their 7th Premier League dismissal of 2020 – the Gunners boss was keen to praise his side’s character for managing to grind out a result.

“It’s very difficult to compete in this league when you play as well for such a long period with ten men. And we were struggling for the result which makes it even more complicated. But I think that the boys stood up through it and they showed a lot of character and again a lot of resilience and they never gave up. After 1-0 I was worried because after this moment you can start to see players tiring and it didn’t really help.”

Arsenal are up against Arteta’s former club Everton in the Premier League on Saturday afternoon.