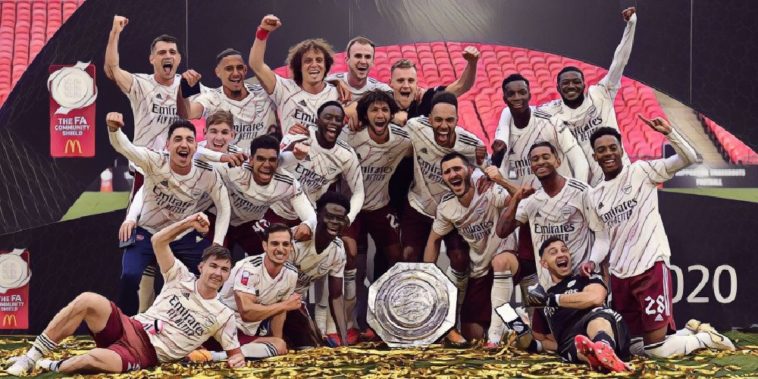 Mikel Arteta made it two trophies in the space of a month as Arsenal beat Liverpool on penalties in the FA Community Shield final at Wembley.

Liverpool saw an early Virgil van Dijk goal chalked off for offside, before the Premier League champions found themselves going behind after just 12 minutes.

Arsenal – who lifted the FA Cup on August 1st – worked the ball out from the back, before Bukayo Saka sprayed a delicious cross-field ball from right to left out to Pierre-Emerick Aubameyang. The Gabon international drifted inside before sumptuously curling the ball past Alisson from the edge of the box, though young Liverpool right-back Neco Williams could have perhaps done more to close the prolific striker down.

As Klopp had predicted pre-match, Liverpool were far from their sparkling best, and while they created a few chances, particularly through Andy Robertson down the left, they came up against an Arsenal side who looked well drilled at the back.

The Gunners also looked promising going forward, though 21-year-old striker Eddie Nketiah spurned a couple of first-half chances to extend the lead. The best came after a driving run from Xhaka found the impressive Saka down the right, who found the Lewisham born forward on the edge of the box, though his low effort was well saved by Alisson.

In the second half, Liverpool number nine Roberto Firmino curled an effort from range agonisingly wide, before they finally got a shot on target in the 55th minute – Andy Robertson’s raking ball from deep finding the onrushing Sadio Mane who got in behind Rob Holding, only to be thwarted by Emiliano Martinez, though replays suggested that it would have been ruled out for offside.

The man for the big occasion. pic.twitter.com/wC3irrMYTZ

Jurgen Klopp’s side finally started to click in the latter stages of the game, and hauled themselves level with 17 minutes to play, January signing Takumi Minamino linking up with Mohamed Salah before the Japan international smartly tucked the ball home for his first goal in English football.

Arsenal ended the game strongly and created a number of promising chances, though were unable to find a breakthrough, Joe Willock’s close-range header the pick of the late chances. Willock’s effort would ultimately be the last of the game and the tie went to penalties.

The Gunners would claim their 16th Community Shield with five flawless spot-kicks, Liverpool’s young striker Rhian Brewster being brought on for the shootout only to see his powerful effort crash off the top of the bar, leaving Aubameyang to seal the victory.

Speaking afterwards, Mikel Arteta – who is still in his first year as a head coach – was delighted with his side’s courage against the recently crowned champions of England.

“I’m so happy,” Arteta told BT Sport. “I knew the challenge we were facing today. Thank you to the players for the effort and the performance.

“The courage of the team [was the most pleasing thing], how aggressive we were without the ball and to break the pressure of Liverpool. I knew in the second half we would suffer.

“This generates belief, to be able to compete against a team like this in a final makes me happy.”

Speaking about goalscorer Pierre-Emerick Aubameyang, the Spaniard added: “Big games, big moments, big players. He has responded really well to that kind of pressure. He was magnificent in the FA Cup final and the same today.”

The 31-year-old is believed to be close to committing his future to the North London, and he admitted ‘its an exciting time to be an Arsenal player’.

“We’re going to see in these days,” Aubameyang said. “Today we take the trophy, that’s it. We are improving. There is still work to do but I’m really happy and it’s an exciting time to be an Arsenal player.”