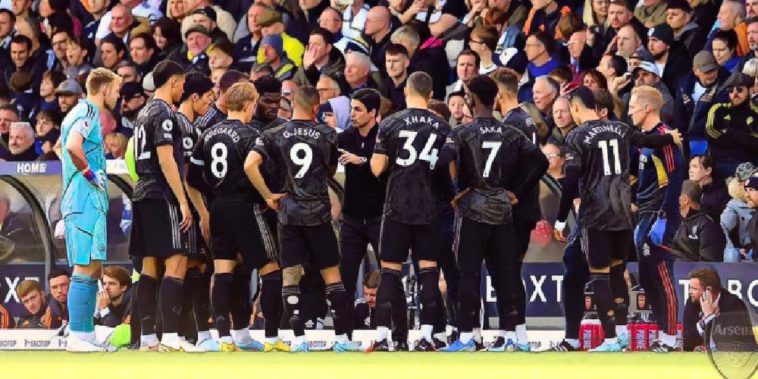 Premier League leaders Arsenal missed the chance to re-establish a four point lead after Southampton came from behind to earn a point at St Mary’s.

Mikel Arteta’s Gunners got off to a confident start on the south Coast and it was no surprise to see them take the lead through in-form midfielder Granit Xhaka on 10 minutes. Arsenal right-back Ben White played a neat one-two with Bukayo Saka before floating a cross into the area, which Xhaka met on the half-volley and hammered home into the roof of the net.

Southampton did eventually start to get a foothold in the game, but the nearest they came to an equaliser was a succession of James Ward-Prowse corners, while Arsenal almost doubled their lead when the sharp-looking Gabriel Jesus fired a left-footed effort into the side netting after some neat footwork in the area.

Today’s game had been played out in front of a somewhat subdued home support at St.Marys, although that all changed on 65 minutes when the Saints scored a superb equaliser. A flowing team move from back to front ended with Mohamed Elyounoussi slipping a perfectly weighted ball in behind the Arsenal defence for Stuart Armstrong to reverse a classy finish past Aaron Ramsdale.

Arsenal thought they had retaken the lead on 78 minutes when their skipper Martin Odeegard blasted home a cut back from substitute Kieran Tierney, but the ball had gone out of play before the Scotland international crossed.

Both teams pushed on in search of a winner, but neither was able to create a clear-cut chance and the game ended in a draw, which on the balance of play was probably fair.

Arsenal remains top of the Premier League table, although Man City are now just two points behind, and speaking after the Gunners coach Arteta was clearly disappointed his side could not seal the win.

“It should have been a different outcome. Credit to Southampton, they did very well,” Arteta told Sky Sports.

“We started to concede a lot of long throws. We created the two biggest chances in the second half but it wasn’t enough to win the game.

“We just didn’t put the ball in the back of the net. We had enough chances to get the win. It’s very disappointing.”