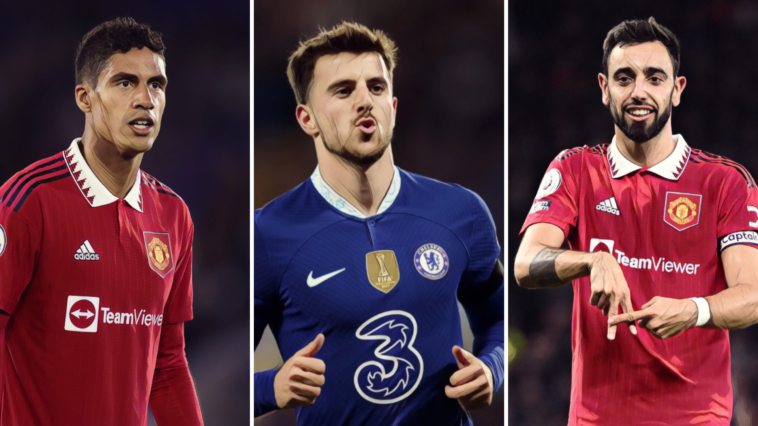 Chelsea meet Manchester United in the Premier League this weekend with both teams having shown encouraging signs under new managers this season.

The two clubs were once regular rivals for Premier League titles and each will be hoping to improve and return to a status as challengers.

Just a point separates the sides ahead of this weekend’s clash at Stamford Bridge and ahead of their showdown we’ve decided to compile our Chelsea and Manchester United combined XI.

Few envisaged the turnaround of Kepa Arrizabalaga before a ball had been kicked this season, but the Spanish shot-stopper has had a fine renaissance under Graham Potter.

Kepa was outstanding in the win over Aston Villa last weekend with six saves in the first half alone, before another strong performance in the goalless draw at Brentford.

7 – Kepa Arrizabalaga made seven saves while keeping a clean sheet against Aston Villa, his most saves without conceding in his top-flight league career. The Spaniard was expected to concede at least two goals based on the placement of the on-target shots he faced. Rejuvenated. pic.twitter.com/RPJNZeqImR

It’s five consecutive clean sheets for the 28-year-old, who is growing in confidence with each performance.

Reece James would have taken this place had it not been for a cruel injury which looks set to rule the Chelsea defender out of the World Cup.

Dalot is included as his replacement, following a season of notable improvement to date. The 23-year-old has nailed down the right-back role in Erik ten Hag’s side and has taken strides forward in his game, improving from a defensive aspect and providing forward threat down the flanks.

More reliable defensively and more confident further forward, his progress has been welcome with the Portugal international beginning to fulfil his initial promise.

Raphael Varane continued his fine form this season with another excellent performance against Spurs in midweek, as United produced their best display of the season at Old Trafford.

The France international dealt with the threat of the in-form Harry Kane and barely put a foot wrong, with his recent form underlining why he is regarded as one of the world’s best centre-backs. Varane’s confident and composed aura has been a fine tonic for Lisandro Martinez, an unfortunate exclusion from this team given his consistency so far this season.

In the seven games Varane has played 90 minutes this season, United have won all seven and have conceded just two goals.

Thiago Silva remains one of the best defenders in the division despite celebrating his 38th birthday last month, with the Brazilian bringing an evergreen quality to the Blues’ backline.

His leadership and authoritative presence have been at the centre of Chelsea’s recent defensive run and the west Londoners are a better side when Silva is marshalling the troops from deep. His experience and winning mentality are invaluable to a side finding their feet under Graham Potter.

Ben Chilwell is finding his rhythm after an injury disrupted season at Chelsea last term, with the full-back hoping for a prominent role under Graham Potter.

When fit, Chilwell is among the most effective wing-backs in the Premier League and Potter will hope to coax the best from the England international in a position that has been vital to his preferred system.

The 25-year-old will want to prove himself as England’s best left-back this season and has a goal and two assists from seven league appearances during the current campaign.

Anchoring our midfield diamond is Casmeiro, who produced his best performance of the campaign during United’s 2-0 win over Tottenham.

The Brazil international was dominant in the engine room as the Red Devils eased to a statement win, providing the defensive security at the base of the midfield.

Casemiro's game by numbers vs. Spurs:

He snapped into challenges and was confident in possession, in a performance reminiscent of his Real Madrid best. The five-time Champions League winner will have a big role to play for Erik ten Hag this season.

Mateo Kovacic’s best work rarely earns headlines but the Croatian is among the most complete central midfielders in the division.

Tenacious, technical and with press-resistant dribbling that can take Chelsea from back to front with ease, Kovacic’s understated influence could be crucial when Manchester United visit the capital this weekend.

Mason Mount has recovered from a slow start to the season to find his form in recent games, with the midfielder a crucial component of the Chelsea side.

Full of endeavour and invention, Mount has now been involved in five goals (2G/3A) in his last three appearances for the west Londoners and looks to be enjoying his football once again.

His mix of technical quality and tactical intelligence have made him a firm favourite of several coaches.

Bruno Fernandes appeared back to his best during the midweek win over Spurs, capping a brilliant creative performance – in which he created nine chances and recorded a pass accuracy of 93% – with a wonderful goal.

Across the past two seasons, a player has created eight or more chances in a Premier League game on four occasions – three of which have been Fernandes.

The midfielder has been the stand-in captain for the Red Devils in Harry Maguire’s absence and it is a role he has revelled in to date. Always willing to take possession and happy to shoulder the responsibility for making things happen, he is the ideal creator at the tip of our midfield diamond.

Raheem Sterling’s career with Chelsea has not quite caught fire yet, but he has returned a healthy six goal involvements from 13 appearances across all competitions.

Graham Potter will know the forward is capable of more, with Sterling having been among the most effective wide players in the Premier League for several seasons.

His direct approach and ability to take defenders out the game with sharp acceleration will be crucial to England at the World Cup in Qatar.

Neither side is blessed with reliable forward talent at present, but Aubameyang has made a solid start to his time at Chelsea.

The Gabon international has scored three goals in six starts for the west Londoners, who have struggled to find a consistent source of goals at centre-forward. The 33-year-old is reaching the latter stages of his career, but boasts a formidable record in the Premier League with 69 goals from 131 appearances for Arsenal and Chelsea.

That haul includes winning a share of the Golden Boot in 2018/19 and Chelsea will hope his goals can lead to a top four finish and silverware success this season.