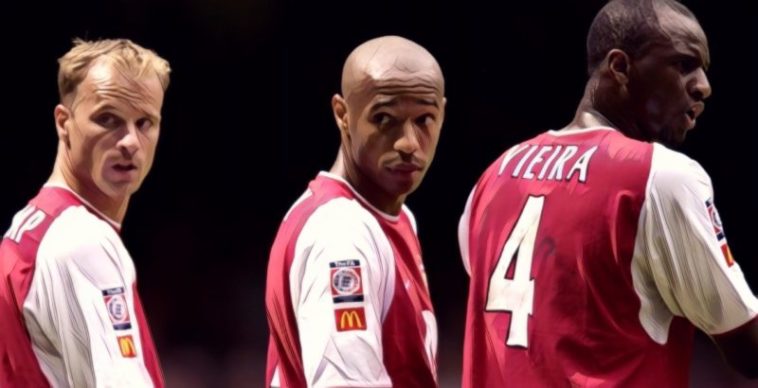 Arsene Wenger became the longest serving manager of the Premier League era after spending more than two decades in charge of Arsenal, bringing a wealth of success to the north London side and revolutionising English football with his innovative methods.

The Frenchman won a record seven FA Cups and three league titles amongst his major honours with the Gunners, whilst his knowledge of foreign markets saw the introduction of a host of unheralded players who would go on to make a major impression on these shores.

We’ve decided to look back at the players to have featured most often under the Gunners’ great, here is Arsene Wenger’s most used XI:

Wenger inherited the nucleus of a side who had been famed for their defensive strength, the club’s famous back four offering added assurance ahead of England number one David Seaman.

Seaman was a hugely reliable presence throughout much of the nineties and established himself as an undisputed first-choice for club and country, making 298 appearances under Wenger and winning two domestic doubles under the Frenchman.

Commanding, agile and capable of spectacular saves, Seaman is regarded as one of the greatest players in Arsenal’s history and played a crucial role in the club’s early successes of the Wenger era.

One of a succession of relatively unknown talents plucked from French football during Wenger’s years at the club, Sagna made the move to Arsenal from Auxerre and spent seven seasons in the first-team at the Emirates.

During that time the French full-back made 284 appearances under his compatriot and was twice named in the PFA Team of the Year, his athleticism and defensive determination marking him out as one of the best in his position in the Premier League.

He established himself as a fans’ favourite at Arsenal, winning the FA Cup in 2014 before leaving the club to join Manchester City.

Another Frenchman to establish himself as a key figure at Arsenal during the Wenger era, Koscielny made 324 appearances for the north London side following his move from Lorient in 2009.

During that time the centre-back helped the Gunners end a nine-year trophy drought with FA Cup success, before winning the competition a further two times and later being named as club captain.

Regarded amongst the division’s leading defenders at his peak, Koscielny tarnished a decade at the club following an ill-advised strike to force through a move to Bordeaux in 2019.

Despite his over-exuberant determination to win the ball, Toure signed for the north London side and went on to make 327 appearances in all competitions under Wenger, winning the FA Cup twice and forming part of the side which completed a famed unbeaten season to be crowned champions in 2004.

Toure’s incredible likability and cult status should not detract from the talents of the player at his peak, a formidable defender who at £150,000 proved one of Wenger’s greatest bargain buys.

Gael Clichy was another player plucked from obscurity before enjoying a long career at the Gunners, becoming the youngest player ever to win a Premier League title during the club’s ‘Invincible’ campaign, a record later broken by Manchester City’s Phil Foden in 2018.

After three seasons of tentative progress the Frenchman was tasked with filling the considerable void left by Ashley Cole’s departure to Chelsea, becoming a first-team regular for the next five seasons and being named in the PFA Team of the Year in 2007/08.

Clichy – after previously slating players heading to Manchester City as mercenaries – later left the capital to join the Etihad club, though his decision was somewhat vindicated with two Premier League titles.

Part of a formidable attacking threat during the peak of Wenger’s years as Arsenal manager, Swede Ljungberg became one of the club’s great bargains following his arrival from Halmstad and established himself as a cult hero over nine years with the Gunners.

During that time Ljungberg – on occasion accompanied with his trademark club-coloured mohawk – helped the north London side to two league titles and three FA Cups, as well as being named as the Premier League Player of the Season after scoring 17 goals during the double-winning season of 2001/02.

That season also saw the Swede score a stunning goal in Arsenal’s FA Cup final victory over Chelsea in Cardiff, one of 72 goals he scored for the club across all competitions.

Vieira ticked every box of what is required to thrive in the heat of a midfield battle, an imposing and aggressive competitor with a fine passing ability and penchant for making vital contributions.

The Frenchman’s notorious clashes with Manchester United counterpart Roy Keane are the stuff of Premier League legend, the rivalry between the two sides the most intense and fascinating of the rebranded league’s era.

Vieira made 388 appearances under Wenger and won a wealth of major honours, including two domestic doubles and captaining the side to their legendary undefeated season.

10 of the best quotes on Arsenal icon Patrick Vieira

Amongst Arsenal’s most important contributors of the latter Wenger years, Ramsey was plucked from Cardiff City as a teenager before flourishing into a key figure for both club and country under the Frenchman’s tutelage.

The Welshman was regarded as one of the Premier League’s leading box-to-box midfielders during his 11-year spell at the Emirates, making 329 appearances under Wenger and twice being named as Arsenal’s Player of the Season.

His most memorable contributions came with his ability to decide the biggest of occasions, scoring winning goals in both the 2014 and 2017 FA Cup finals as the Gunners won the competition three times in four seasons.

Ramsey left the club to join Juventus in 2019 on a free transfer, in what must surely rank amongst the Gunners’ worst pieces of business in recent years.

No player has made more appearances under Arsene Wenger than Theo Walcott, Arsenal winning the race to sign the precociously talented youngster following his emergence at Southampton.

Walcott may not quite have reached the heights expected after travelling to the World Cup with England as a 16-year-old, though he proved a fine player for Arsenal in more than a decade at the club, making 397 appearances during Wenger’s reign and playing in a variety of roles across the forward line.

During that time Walcott scored over a century of goals and won the FA Cup twice, memorably scoring the opener during the 2015 final success over Aston Villa at Wembley.

The signing of Thierry Henry must surely rank as Wenger’s shrewdest acquisition, the youngster arriving as an underperforming winger from Juventus before evolving into arguably the greatest player in the history of both Arsenal and the Premier League.

Few, if any, players have stood out quite as comfortably as the Premier League’s finest, Henry the unquestionable star of English football throughout much of his 377 appearances under Wenger in north London.

The first player to win the PFA Player of the Year in successive seasons, he was also named as the FWA Footballer of the Year on three occasions and remains the club’s all-time record goalscorer with 228 goals.

Dennis Bergkamp had made a solid if unspectacular start to life in English football after arriving at Arsenal in a record deal from Inter Milan, but the arrival of Wenger at Highbury took the Dutchman’s game to new heights and saw him become one of the greats of the Premier League era.

Bergkamp was the inspiration behind Wenger’s first double-winning season of 1997/98, winning a PFA Player of the Year and FWA Footballer of the Year double and starring as the creative heartbeat of the Frenchman’s first great side.

15 of the best quotes on Dutch Master Dennis Bergkamp