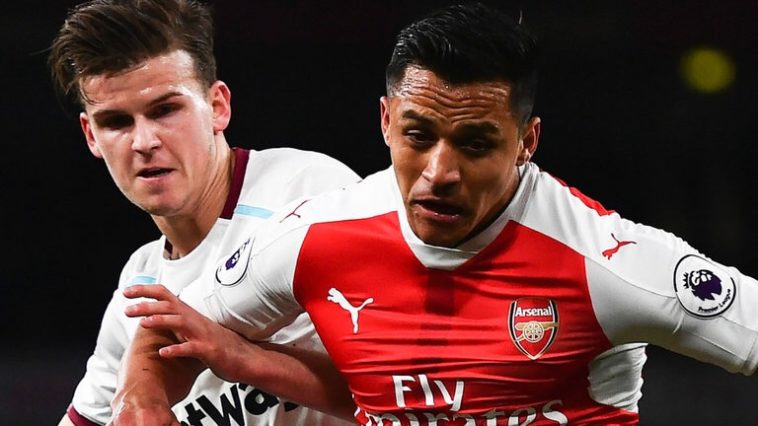 Arsenal beat West Ham United 3-0 to maintain their hopes of Champions League football next season. For the Hammers, the defeat means they have now lost five games in a row and are in a very serious relegation battle.

Here are five things we learnt, mainly about West Ham.

West Ham have no plan B

After five league defeats on the trot, relegation for West Ham is now a very real possibility. The desire to win seems to have disappeared, while teamwork and togetherness has completely wilted.

West Ham had no shots on target in the first half against Arsenal, which seems to suggest they came to get a draw. Unfortunately, once the Gunners had gone ahead the game was up. West Ham had no plan B.

A defensive formation needed to be changed into a more offensive system. Manager Slaven Bilic failed to do this. Consequently, West Ham lost easily and without putting up much of a fight.

It is well documented that West Ham’s summer signings have been a disaster. [see my previous article at: https://thefootballfaithful.com/west-ham-failing-to-meet-the-asking-price/] The recent ones have not been any better.

Last night central defender Jose Fonte, who was purchased in January for £8 million, was poor yet again. His heading is haphazard and his clearances generally go straight to an opposition player.

West Ham made a terrible mistake last year by selling home-grown defender James Tomkins, and then replacing him with Fonte.

The other signing in January – Robert Snodgrass – has yet to put in a good performance and never looks comfortable on the ball.

Both of West Ham’s January signings have – so far – been very poor and they need to quickly up their game or else the Hammers could be playing in the Championship next season!

West Ham are not ‘too good to go down’

Too good to go down is a much-used phrase trotted out on a regular basis about one team or another that is lingering near the bottom of the Premier League.

People have said it this season about West Ham. Let’s get this straight, West Ham are not too good to go down!

Five straight defeats mean the Hammers are bottom of the form table. Even Sunderland and Middlesbrough have picked up a point durging that period.

Swansea is a must win game

West Ham ‘entertain’ Swansea City at the London Stadium on Saturday in a proverbial six-pointer.

Victory would ease the relegation worries and move the Hammers up the table. Defeat on the other hand and the Swans would move to within two points of the Hammers.

A win is essential as the following week West Ham play Sunderland away. The Hammers must find a way of winning both of these fixtures.

Arsenal fans have it easy

As a West Ham supporter, I don’t fully understand why some Arsenal fans are continually protesting and demanding Arsene Wenger quit the club.

The team always qualifies for the Champions League and as far as I can remember they have never been in a relegation battle. What do they want? No team has a God-given right to win the Premier League.

I would advise them to be careful what they ask for. There is no guarantee that Wenger’s successor would bring the league title to the Emirates. Just be grateful that you don’t support West Ham or any other team battling it out near the foot of the table.

The Gunners now move back above Manchester United into fifth place, only four points behind fourth spot. Despite all of the poor results, protests and crisis talks, Arsenal are still very much in the mix for the Champions League positions.