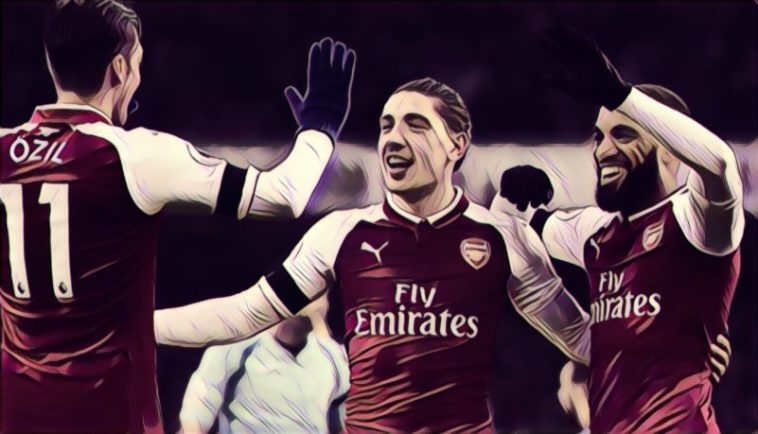 Arsenal dismantled a poor Crystal Palace side with some scintillating attacking football at the Emirates earlier today. The Gunners ran out 4-1 winners to ease the pressure on under fire boss Arsene Wenger. Let’s see how the players rated …

Rarely troubled for the most part, and had no chance for the goal.

Got forward well, and covered a huge amount of ground on the right-flank.

Did not back down from the battle with Benteke, and made one crucial far post clearance early doors.

Well that was eventful. In the 32 minutes before the Spaniard went off injured he managed to open the scoring, and then lay on two assists.

Did alot of the dirty work that allowed his sides more talented players to flourish.

Brilliant whipped corner for the opener and passed well.

Sometimes you just have to admire how effortlessly brilliant the German is on the ball. Sublime flicked assist for Lacazette’s goal.

Movement was sharp all day, and got his name on the scoresheet for the first time in 10 games.

Excellent, constantly looking for the ball and finished his goal well.

A couple of tidy touches after his introduction.

Continues to impress in both attack and defence.

Doesn’t look good enough for this level at all. Should have done a lot better for Lacazette’s goal.

Has talent, but his lack of composure caused his own side problems too often.

I have no idea how this fella is a Premier League footballer.

Decent in flashes going forward, but suspect defensively, which is the story of his career really.

A shadow of the player who was so good for Newcastle a few seasons ago.

Decent finish for his sides consolation, but was chasing shadows in the centre of the park for most of the day.

Palace’s best player, just couldn’t get into the game today.

Will seriously need to up his game if he wants to earn a new contract at Selhurst Park.

Lost too many duels with Mustafi. Another player who looks no where near the levels he was capable of producing in the past.