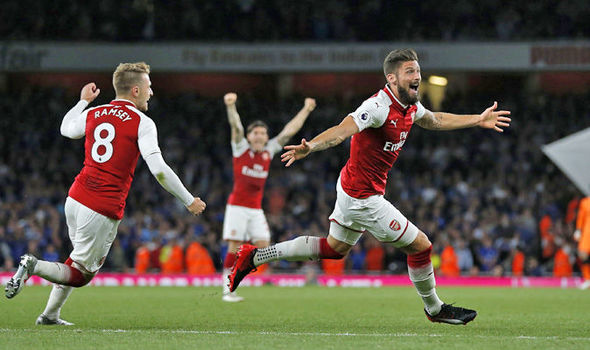 Arsenal won their first match of the season with a 4-3 thriller against Leicester City.

The new Premier League season began on a Friday, for the first time, with Arsenal hosting Leicester City.

Alexandre Lacazette got his and Arsenal’s season off to the perfect start with a debut goal in the first two minutes. He got on the end of an excellent cross from Mohamed Elneny to stun the visitors with his second touch of the game.

Arsenal weren’t celebrating for long because just 160 seconds later, Leicester had equalised through Shinji Okazaki. Harry Maguire, another debutant, headed the ball back in for his new team-mate who beat Granit Xhaka to head home with ease.

Danny Welbeck nearly finished off an attacking move for Arsenal after a few one-touch exchanges with Mesut Ozil but his shot was blocked by Harry Maguire.

Against the run of play, a brilliant low cross from Marc Albrighton was met by Jamie Vardy who put his side in front from close range. Arsenal were shell shocked.

The home side had been better but failed to take their chances. Just before half-time Welbeck made up for his earlier missed chance. He weaved through the Leicester defence, who made no attempt to tackle him, and equalised for Arsenal after linking up with new signing Sead Kolasinac.

Arsenal didn’t learn from their mistakes and were behind again 10 minutes into the second half. Vardy punished Arsenal for sloppy defending when he won a free header from Mahrez’s corner to give Leicester the lead once again. No Arsenal player made an attempt to stop Vardy from winning the ball and he took his chance to score his fifth goal in five appearances against Arsenal.

Alex Oxlade-Chamberlain seemed most determined to equalise for Arsenal. His cross into the area was cleared and then his shot from outside the box was saved by Kasper Schmeichel. The rebound fell to Lacazette but Arsenal’s record signing was ruled offside.

Welbeck found himself in space and passed to Hector Bellerin whose shot was stopped by Schmeichel. Aaron Ramsey nearly scored with his first touch after coming on as a substitute but Christian Fuchs made sure to pressure him into a mistake.

With eight minutes remaining Ramsey did find the equaliser for Arsenal after being set up by Xhaka. Leicester didn’t barely had time to process the goal before super sub Olivier Giroud made it 4-3 and won the game for Arsenal with a bullet header which went in off the crossbar despite Schmeichel’s best efforts to claw it out.

Arsenal were triumphant in a Premier League classic with Leicester unlucky to be on the losing side. Jamie Vardy has now scored five goals against Arsenal and is still yet to be on the winning side.