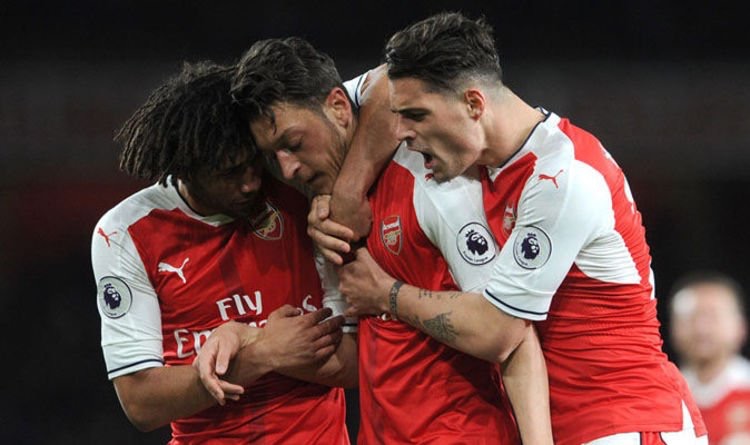 Three second half strikes from Mesut Ozil, Theo Walcott and Olivier Giroud gave Arsenal a much needed three points at the Emirates against their struggling London rivals West Ham.

In a game that both sides needed to win, the first half lacked quality and excitement. West Ham had three shots from Manuel Lanzini, Mark Noble and Michail Antonio, none of which were on target.

The Gunners could have had a penalty when Theo Walcott was brought down in the area by Arthur Masuaku but referee Martin Atkinson was not interested.

Arsenal had several chances towards the end of the half. Alexis Sanchez picked Hector Bellerin out with a superb pass but his shot was blocked, and so was Mohammed Elneny’s follow-up. Theo Walcott got in behind Masuaku but Darren Randolph blocked at his feet and Masuaku recovered to clear the danger. It was goalless at the break.

The home side continued pressing when the second half got underway. West Ham were struggling to get out of their area as they faced an Arsenal onslaught. Despite all the pressure, Arsenal still couldn’t break the deadlock.

Mesut Ozil could have marked his 150th appearance for Arsenal with a goal. He was denied by a well-timed tackle from James Collins at the vital moment.

After finally getting the goal their second half performance deserved, Arsenal were in full control. The second goal came 10 minutes after the first and Ozil was involved yet again, this time providing the assist. He met Alexis Sanchez’s backheel and Walcott was in the box to slot in from the low cross.

Sanchez produced a dink over the top for Bellerin, who ran free into the bow, but his shot was inches wide.

Third choice Arsenal keeper Emiliano Martinez was called into action for the first time in the 75th minute. Lanzini beat two men and took aim but Martinez dives to his left to parry and maintain his clean sheet.

Just two minutes after coming onto the pitch, Alex Oxlade-Chamberlain found fellow substitute Giroud who curled a left-footer inside the far corner to put the game to bed.

The final whistle went and Arsenal were 3-0 winners over their London rivals. It was a must needed win for the Gunners but the Hammers have now suffered five consecutive league defeats. Things are looking bleak for Bilic.