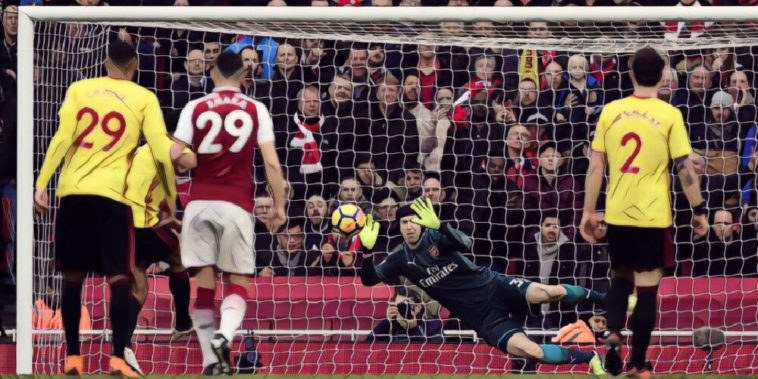 Arsenal got back to winning ways in the Premier League with a 3-0 victory against Watford. Here are five things we learned.

What a day for Cech

It is a well-known fact that since joining Arsenal, Petr Cech has failed to save a penalty. Finally, at the 16th attempt, Cech put that right. Watford were awarded a penalty just after Arsenal went 2-0 up when Ainsley Maitland-Niles fouled Roberto Pereyra. Deeney’s tame effort was saved by Cech who, at long last, became the first goalkeeper to reach 200 Premier League clean sheets.

Cech has been waiting to reach that milestone since his last clean sheet, which came in the 1-0 win against Newcastle all the way back on December 16th.

Another loss in London for Watford

Since beating Arsenal 2-1 in January 2017, Watford have lost seven consecutive league games in London, conceding 20 goals during that run. The capital is certainly not proving to be a happy hunting ground for the Hornets.

Arsene Wenger has made it clear on several occasions that he would rather not get Champions League football by winning the Europa League. However, with Arsenal almost certain to miss out on a top-four spot, Wenger has had to change his tune.

Against Watford, he made six changes to the side that beat AC Milan 2-0 last Thursday with the second leg in mind. Laurent Koscielny and Aaron Ramsey were not in the matchday squad at all, while David Ospina, Calum Chambers, Jack Wilshere and Danny Welbeck were on the bench.

To say Troy Deeney is unpopular among Arsenal fans would be a massive understatement. They simply cannot stand him. Gunners fans has never forgotten Deeney (rightly) saying that Arsenal were lacking “cojones” when his side beat them 2-1 at Vicarage Road in October. Deeney missed a penalty against Arsenal today and was jeered by Arsenal fans for the whole game as they won 3-0.

Mesut Ozil is undoubtedly one of Arsenal’s best and most creative players. He has now become the fastest player to record 50 assists in the Premier League (141 games), breaking Eric Cantona’s previous record (143 games). On his day, Ozil is mesmerising to watch. He should have had a goal as well as an assist against Watford but was denied by the legs of Orestis Karnezis.