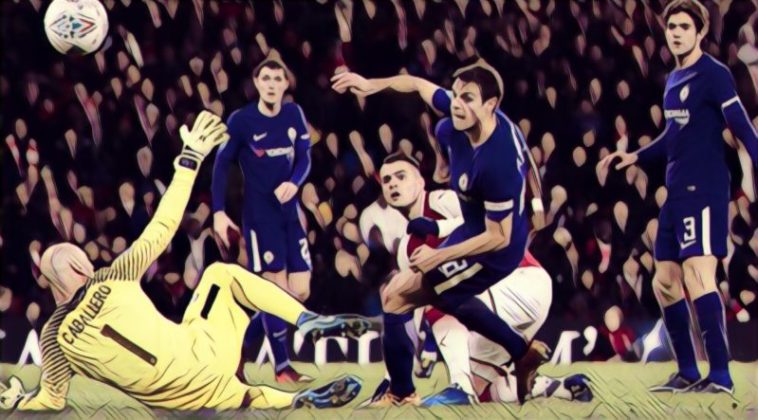 Arsenal beat Chelsea 2-1 in a tightly contested encounter at the Emirates tonight to qualify for the final of the Carabao Cup. Arsene Wenger’s men will face Pep Guardiola’s Man City side at Wembley next month, but enough about that for now, let’s see how the players rated tonight …

Had very little to do except pick the ball out of his net early on with the away side only having two shots on target all night.

Always has a really good battle against his countryman Alonso, and the Arsenal man probably just about edged it tonight.

Didn’t cover himself in glory for the goal, but defended well as the game entered its latter stages.

Had a shaky start, although improved as the game went on.

His header was deflected in for the equaliser and put in a performance full of grit and desire in defence.

Had to walk a disciplinary tightrope after picking up an early booking, but contributed well in the middle of the park.

Did a decent job in defensive midfield and slotted into a back three well late on.

A winning goal and no booking, enjoy it while you can Granit.

Is proving a lot of his critics wrong with his work-rate lately. Some classy touches and passes as usual.

Worked the channels well to create space for others and played a part in the winner.

Not great. A bit naive in possession and should have done better when through one-on-one late on.

No chance with either goal and made a couple of tidy stops.

Solid as always. Passed the ball out well from the back at times.

Continues to impress defensively and in possession.

Poor fella. Scored an own goal with a really unlucky deflection for Arsenal’s equaliser, and then laid on a perfect assist for the winner when his attempted block fell perfectly into the path of Xhaka just a few yards from goal.

Worked hard down the right but got very little change out of a resolute Monreal.

Terrible. I can’t figure out what he does except for run around a lot.

An off night for the normally excellent Spaniard.

Looked really sharp until he was forced off after a half-hour with a hamstring injury.

Tidy assist for his sides early goal, although he faded as the game went on.

Took his goal well and was a constant menace with the ball at his feet, his sides best player.

Had a hour to impress but was ineffective. Clearly isn’t match fit however.

His manager obviously doesn’t rate him, and after tonights cameo it’s easy to see why.