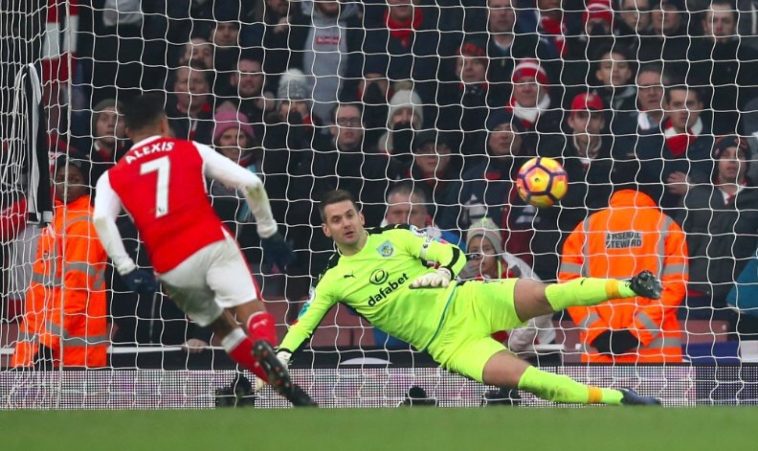 Late goals. Red Cards. Penalties. Heartbreak and Elation. This game had it all as Arsenal struck late to beat Burnley at the Emirates.

Arsenal had to beat Burnley to keep their slim title hopes alive. If they did, they would be up to seco day in the table behind league leaders Chelsea.

It was a lively start to the game from both sides. Alexis Sanchez was at the forefront of Arsenal’s early chances. He crossed to Olivier Giroud whose header was cleared by Stephen Ward. Sanchez had an opportunity to score minutes later but his header was wide. Arsenal were starting to dominate the game and Mesut Ozil’s strike forced another save from Burnley keeper Tom Heaton.

Burnley had their own chance to take the lead in the 16th minute. Ashley Barnes tested Petr Cech but his shot was pushed behind for a corner. After half an hour the score was still 0-0 but both teams were creating chances in an effort to break the deadlock.

Arsenal really should have been ahead but Burnley stood firm and denied the Gunners at every opportunity. Ozil and Sanchez were at the heart of almost every Arsenal move but the match remained goalless. Sanchez curled a shot just wide a few minutes before half-time. Despite having 14 shots, Arsenal could not get past Burnley and the first half ended 0-0.

The Gunners had to win this match to go second. Burnley, of course, were not going to make it easy for them. The Clarets have picked up just one point from a possible 27 on the road but they are always a difficult opponent to face as Arsenal were finding out.

Arsenal started the second half just like the first; creating plenty of chances but failing to score. Arsene Wenger’s side kept trying to walk the ball into the net, as usual, but Burnley were having none of it. Ben Mee and Micheal Keane were fantastic at the back for Burnley, stopping multiple Arsenal attacks. http://gty.im/632385374

Shkodran Mustafi was the man to finally break the deadlock. His header from close range was his first goal for Arsenal and gave the Gunners the lead their play deserved.

Just six minutes after Arsenal took the lead and finally looked comfortable, Xhaka was shown a straight red, his ninth in three seasons, for a reckless two-footed lunged on Steven Defour. Wenger then had to make a substitution as Alex Iwobi came off and was replaced by Francis Coquelin.

Joey Barton came on in place of Jeff Hendrick for Burnley with 18 minutes to go as Sean Dyche made his first change.

In the 73rd minute, Dean Marney tackled Ozil but was shown a yellow card. It was a similar challenge to Xhaka’s and he also failed to get the ball. The Burnley player was injured after making the tackle and had to be stretchered off. He was replaced by James Tarkowski. Burnley made their final change as Sam Vokes came on for Steven Defour.

The Clarets were trying everything to get an equaliser, especially with Arsenal down to 10 men but the Gunners defended well.

Giroud’s run of five goals in five consecutive games came to an end today as he was substituted for Danny Welbeck in the 87th minute. A minute later Wenger made his final change, taking off Mesut Ozil and replacing him with the returning Hector Bellerin.

Referee Jon Moss awarded seven minutes of stoppage time and in the 92nd minute Coquelin’s clumsy challenge on Ashley Barnes resulted in a penalty for Burnley. Typically, it was childhood Arsenal fan Andre Gray who slammed the penalty into the back of the net for Burnley’s equaliser.

As if that wasn’t enough late drama, in the 96th minute Ben Mee caught Laurent Koscielny with a high boot and Arsenal were awarded a penalty. Alexis Sanchez converted the penalty to make it 2-1 to Arsenal and give them all three points. The victory against Burnley is Arsenal’s fifth consecutive home win in the Premier League. Arsenal are now 2nd in the Premier League but boy oh boy did they do it the hard way!