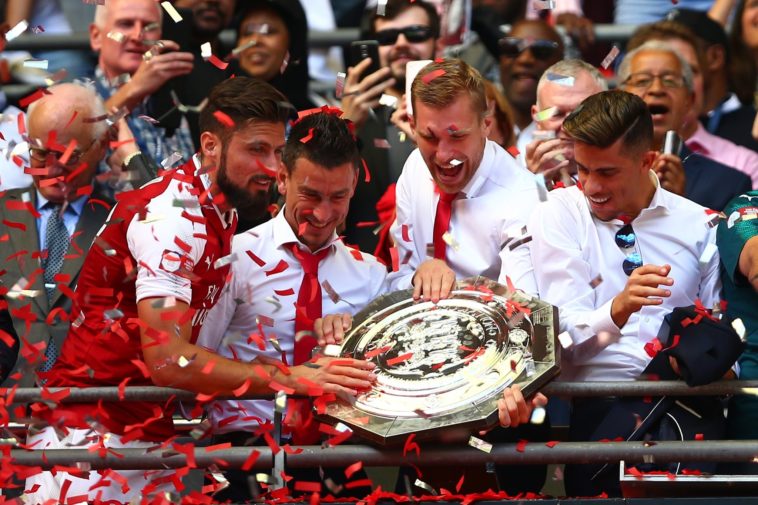 Arsenal and Chelsea met at Wembley again for the first trophy of the 2017/18 season. With the scores level at full-time, the match went straight to penalties and Arsenal triumphed using the ABBA system.

The Gunners looked sharp from the start and could have been ahead early on. Alex Iwobi bypassed David Luiz with ease but his cutback bounced off Alexandre Lacazette and deflected wide.

Club record-signing Lacazette nearly opened his account at Wembley when he curled an effort from inside the box following a counter attack but it rattled off the woodwork.

Per Mertesacker was involved in a nasty collision with Chelsea captain Gary Cahill and had to be withdrawn. Arsenal’s other new signing, Sead Kolasinac, replaced the Gunners captain.

Chelsea began to grow into the game after a slow start and Pedro drew a fine save from Petr Cech after being put through by Willian.

Soon after this, Willian went down in the box and appealed for a penalty but was instead booked for simulation. It seemed the Brazilian kicked his own leg which caused him to lose his balance.

Arsenal’s slow start to the second half was punished by Victor Moses who put Chelsea in front from close range. Granit Xhaka’s high and ineffectual clearance was headed back into the danger area by Cahill and Moses was quickest to react. The Gunners could have been punished even further when the defence failed to pick up Cesc Fabregas. The former Arsenal captain’s cross found Michy Batshuayi whose header was straight at Cech.

Elneny had a chance to get Arsenal back into the game just on the hour mark but his fierce cross-cum-shot was seen in time by Thibaut Courtois.

Courtois was on hand again to deny Xhaka’s brilliant strike with an equally brilliant save. The Belgian stopper got a crucial fingertip to the ball to prevent Arsenal equalising.

With 80 minutes played, Pedro was shown a straight red card after a dangerous tackle on Mohamed Elneny. Just like the FA Cup final, Chelsea were down to 10 men. And things got worse for the Blues a minute later. Kolasinac met Xhaka’s free-kick delivery with ease to equalise for the Gunners and became the first player to score his first Arsenal goal in the Community Shield since Gilberto Silva in 2002.

The sides couldn’t be separated at full-time so the 2017 Community Shield was decided on penalties. The new ABBA format for penalties was trialled. This means that Team A take one penalty then Team B take two in succession. After this each team takes two in a row until there is a winner.

Cahill stepped up first for Chelsea and scored before Theo Walcott and Nacho Monreal converted for Arsenal. Courtois and club record-signing Alvaro Morata missed Chelsea’s next two penalties before Alex Oxlade-Chamberlain scored for Arsenal. Then Olivier Giroud, who came on as a substitute, scored Arsenal’s fourth penalty to win the Community Shield.

It was a dramatic end to a dramatic game. If the 2017/18 season is anything like this, there is much to look forward to!