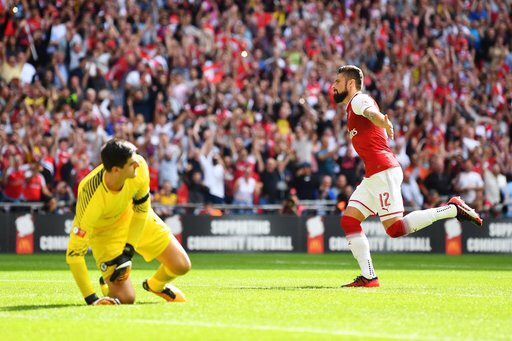 The hangover from the Community Shield has come and gone to kickoff the Premier League season that’s about to begin.

A trophy was up for grabs between the reigning defending Premier League and FA Cup champions. The traditional tilt between silverware winners of last signifies the end of the preseason.

To make it more interesting, this clash for the Community Shield was a London derby between Arsenal and Chelsea. Pride was on the line between the bitter rivals who last faced off in friendly action in Beijing.

To some, the Community Shield doesn’t matter. It’s a glorified friendly. Things like these are usually said by fans of the losing club.

So, we should all forget about this game—it was insignificant and it didn’t matter. Right…right?

I’m kidding, of course (not really), but we could learn a few things from this match as we gear up into the games that really matter, the ones that actually put points on the table.

Here are five things to take away from Arsenal’s triumph over Chelsea in the Community Shield.

Both teams with neat shot discipline.#CFC had little esle besides the goal, #AFC with some chances to win it in regular time.#xGplot pic.twitter.com/8FOb7U9sSQ

Chelsea were slow out of the gate in the first half. Arsenal controlled most of the possession, and left the Blues in a cloud of dust. Alex Oxlade-Chamberlain constantly took the ball and drove it down the left flank like Dominic Toretto’s Dodge Charger in The Fast and the Furious.

Antonio Conte must’ve lit a fire in the hearts of his squad for the second half because they came out to prove a point. The result was a Victor Moses goal in the 46th minute. Chelsea’s “fire” was eventually extinguished. A red card was issued to Pedro for a studs-up tackle, and momentum shifted again, leading to Arsenal’s eventual goal and win in the penalty shootout.

This doesn’t feel like the same Chelsea that went on a 13-match winning streak in October to December 2016. The names on the teamsheet are generally the same, but something feels different. Gone are the goals scored in the first minutes of play. Instead of predators, the Blues are looking more like prey with a target on their backs. It’s scary to think this was an Arsenal side without Mesut Özil, Alexis Sanchez, Aaron Ramsey, and Laurent Koscielny, and Chelsea were still unable to deal significant damage. Hopefully they can find their groove and assert their dominance in England and Europe.

#AFC #passmap a bit tricky with the early sub.
Nice outline of their 3-4-1-2 though.
Double pivot doing its job there. pic.twitter.com/SRV1Kt1K47

This was the same problem as last season in Chelsea’s losses to Arsenal. The North London club controls the midfield more than their West London counterpart, and when then Gunners are not in possession, they work harder to get it back. Their midfield was able to move the ball forward through the centre and the wings, earning them scoring chance after chance.

Meanwhile, Chelsea’s midfield lacked balance as Kanté and Fàbregas seem to play in specialized roles. That doesn’t work well in a two-player midfield, and the Blues could have really used an extra body in the middle to outnumber their opponents.

Unfortunately, Chelsea sold their options in Nemanja Màtic and Nathaniel Chalobah, which leads to the next thing that was learned…

The difference between Arsenal and Chelsea in the number of squad players is astounding, especially if the Blues expect to compete in Europe this year.

In general, Arsenal added to their lineup without losing key players (for now). The additions of Alexandre Lacazette and Sead Kolasinac increased depth, and the Gunners filled out the rest with young players I’ve never heard before, but players nonetheless.

Chelsea have go on to sell their players after a title-winning campaign. The incoming players, coming from other clubs or back from loan, are direct replacements to those who are leaving—none of them actually add something new to the team. Antonio Rüdiger and Andreas Christensen replace John Terry and Nathan Aké. Tiémoué Bakayoko seems to have taken up Màtic’s spot, and Alvaro Morata was brought in after Diego Costa was informed he wasn’t a part of Conte’s plans for the season.

Conte, who has said, “This will be the most difficult season of my career as a coach,” is urging the Chelsea board for more reinforcements. With the season starting and the transfer window coming to a close at the end of the month, the club is running out of time to remedy the situation.

After years of the 4-2-3-1 era, it seems like the 3-4-3 is the new formation of choice for the top clubs in the Premier League.

Three defenders in the back seemed like a pipe dream for FIFA Ultimate Team players wishing their formations would become the new trend in football. They’ve always been shot down saying three-defender formations won’t work in England, and it only worked in Italy because Serie A is supposedly slower-paced.

Antonio Conte proved critics wrong, and the rest of the clubs are following suit.

This could lead to bigger changes in the development of youth players across the nation. This trend might catch the whole country by storm who stayed loyal to a 4-4-2 formation for a long time.

This might seem minor to most people, but I just found it cool that other clubs switched philosophies with the use of more attacking wingbacks with three centre-backs to ward off any danger in the box.

From a fan’s perspective, I didn’t like the new ABBA style of penalties. I swear it’s not because Chelsea lost. Yes, I’ve been brokenhearted, blue since the day we parted…

Okay, it’s a little bit because of Chelsea losing to Arsenal, but that’s because the new rules took suspense out of the result.

Regardless, missing two penalties would put you at a very big disadvantage. In the new ABBA format, I felt no hope after Morata missed as Arsenal were likely to score the next two.

Perhaps I’m overthinking this, but I found the traditional style of penalties to be more exciting, even though the result wouldn’t change.

Even if the team that shoots first was more statistically likely to win in the past, this wasn’t a broken system and it didn’t need fixing. Perhaps the FA or any governing body in the sport should focus on other issues, such as a lack of accountability for the referees.

I just want the old system to stay. Mamma mia, now I really know, my my, I could never let you go.