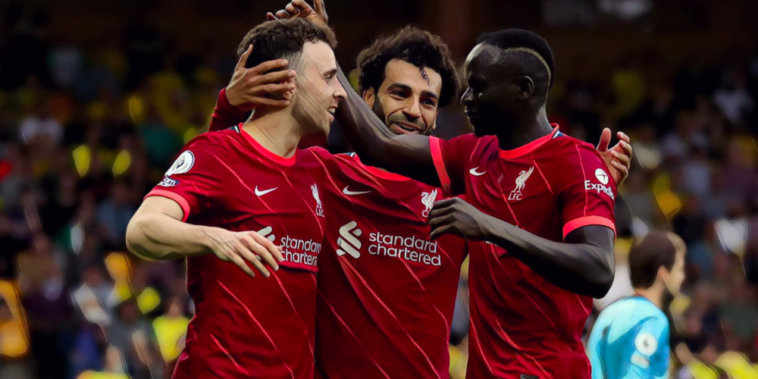 Liverpool produced another display of their attacking talent to thrash Manchester United this week, as the Premier League title challengers beat their fierce rivals 4-0 at Anfield.

It was the second time this season that the Reds had beaten United in convincing fashion and the latest demonstration of a forward line boasting both talent and depth.

Luis Diaz, Mohamed Salah and Sadio Mane each scored and assisted in the win and following their latest showing we’ve decided to look at the impressive numbers behind Liverpool’s attacking options this season.

Mohamed Salah has enjoyed another superb season of productivity for Liverpool, leading the Premier League for both goals and assists in 2021/22.

The current campaign is already Salah’s most prolific since recording 60 G/A during a sensational debut season at Liverpool in 2017/18, having scored 30 goals in all competitions and registered 12 assists.

His season has included a brilliant hat-trick in the 5-0 win over Manchester United at Old Trafford, in addition to Goal of the Season contenders with solo runs against both Manchester City and Watford.

Mohamed Salah is the first player in Premier League history to score 5️⃣ goals against Manchester United in a single season 🇪🇬👑 pic.twitter.com/3kkA6FgQFb

Salah is five goals clear of Son Heung-Min in the race for the Golden Boot as he pursues a third career accolade, a feat previously only achieved by Alan Shearer, Thierry Henry and Harry Kane.

That the Egyptian is posting such numbers and records from a wide role is remarkable and he has also shone in the Champions League this term, netting eight goals in nine starts in Europe.

Each of his 12 assists have come in the Premier League in 2021/22, the highest total of his career so far.

Diogo Jota ranks second for goals at Liverpool, having netted a career-best 21 across all competitions so far this season.

The Portugal international has been a shrewd signing for the Reds and has elevated his game to new levels since arriving at Anfield from Wolves, building on a promising debut campaign with an even better one this time around.

Diogo Jota's last five away goals in the Premier League for Liverpool:

The man for the big occasion. 💪 pic.twitter.com/Nv9NtkzZn0

Jota mixes intelligent movement with a commendable work-rate and has developed a reputation as one of the Premier League’s best headers despite his diminutive stature, with his four headed goals this season a league-leading total.

His versatility in operating across the forward line this season has also been invaluable to Jurgen Klopp.

Luis Diaz’s arrival in January was viewed as some as the logical progression plan from Sadio Mane, with the Senegalese winger deemed as the man likeliest to make way given the form of Salah and Jota.

However, Mane has instead shown his value to the side and has thrived in a new central role, one which arguably gets the best from his talents.

Mane’s intensity has helped lead the press for Liverpool and his menacing closing down of centre-backs and deep-lying midfielders has freed space and created turnovers for teammates.

The goals have also began to flow freely for the 29-year-old with six in his last eight Premier League appearances, a run that has moved Mane to 19 for the season in all competitions.

Excellent in the FA Cup semi-final win over Manchester City before starring in the destruction of Manchester United this week, Mane is set to reach 20+ goals for the fourth time in five seasons as his role evolves at Liverpool.

Roberto Firmino has become somewhat of a forgotten figure for Liverpool this season, with the performances of Jota and arrival of Diaz having broken up the Reds’ tried and tested triumvirate.

Competition for places and injury issues have limited his impact this season, but Firmino has still compiled a healthy return of 15 G/A in 31 appearances this season.

🎶 There's something that the Kop wants you to know…@LFC | #UCL pic.twitter.com/LnPZ3fFXoy

The Brazilian has scored 10 goals from just 11 starts in the Premier League and Champions League this season, averaging a goal every 119 minutes.

His work-rate and importance to the side’s approach play remain valued by Klopp, but will the 30-year-old choose to remain next season given his drop in status at Anfield?

He will enter the final 12 months of his contract this summer and there will be no shortage of takers should he seek an exit.

Liverpool’s ability to compete on multiple fronts this season has come as a result of their strength in depth, with Takumi Minamino having made the most of his opportunities in cup competition.

Minamino has nine goals from just eight starts across all competitions this season and scored four times during Liverpool’s run to the Carabao Cup final.

He has also scored crucial goals in FA Cup wins over Cardiff and Norwich, with Liverpool set to take on Chelsea for the chance to complete a domestic cup double in May.

Divock Origi’s storied career at Liverpool looks set to come to an end this summer, with the forward out of contract at Anfield at the end of the season.

The Belgian remains a firm fans’ favourite for his role in recent successes, in particular crucial goals during Liverpool’s run to Champions League success in 2018/19.

Origi has made just five starts for the Reds this season, but has managed a healthy return of five goals and three assists from that limited action.

It’s time to enjoy that 94th minute winner from Divock all over again, Reds! 😍 pic.twitter.com/c00VEwq3hZ

One of those came with a stoppage-time winner at Wolves in December, a goal that could yet prove crucial to the club’s campaign.

Luis Diaz has hit the ground running since signing for Liverpool from Porto in the winter window, scoring four goals and providing two assists in 11 starts across all competitions.

Whilst those numbers are solid if unspectacular, it is the seamless transition the winger has had into Jurgen Klopp’s system that has excited the Reds’ fanbase.

“It’s utterly depressing. Oh my god, what a player he is. His tenacity, his pace, his skill, his spirit and he’s cost not a lot again. They’ve found another one. They’ve got 5 genuinely world class forwards.” [Sky] pic.twitter.com/lNSugcFxNU

Diaz is fast and technical with the defensive tenacity and intensity to thrive in the Liverpool team, putting fear into defenders with or without the ball at his feet.

Explosive and exciting, Liverpool will hope the fine performances of Diaz so far have only scratched the surface of his true capabilities with the Reds having seemingly landed another star for a fraction of their true worth.