Chelsea manager Antonio Conte is being heavily tipped to become the next manager of Inter Milan.

The Milanese club sacked manager Stefani Pioli yesterday following a disappointing campaign so far, where they are currently sat in seventh place in the league, three points behind their Milan rivals, AC Milan.

The 1-0 defeat to 16th placed Genoa was the final nail in Pioli’s coffin, leading to the Italian club searching for a new boss with just three games to go.

Atletico Madrid boss Diego Simeone is the 6/4 favourites with the bookmakers, whilst former PSG boss Laurent Blanc is next at 3/1.
Next on the list however is Chelsea boss Antonio Conte. He is priced at 4/1 while Jorge Sampaoli is out at 8/1. 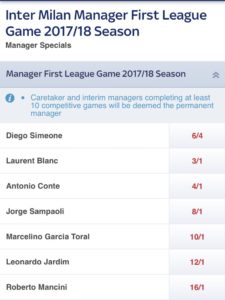 The Chelsea Faithful would be hopeful that Conte intends to stay at the club after an amazing debut season in the Premier League.

Chelsea are just one game away from winning their second Premier League title. This means that a win against WBA on Friday night could effectively be on he same deal as you.

After a year outside of European competition, blues fans are excited about their return to next seasons Champions League, but will be hoping they do so with Conte at the helm.

Should Conte stay to battle for the Champions League with Chelsea? Should Conte go back to Italy? Leave a comment below