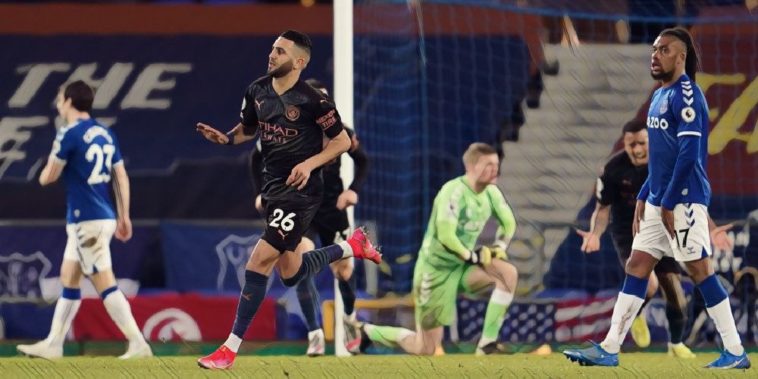 The Toffees came into the came with just two wins in their last six outings – including a disappointing 2-0 loss to struggling Fulham at the weekend – while Man City were on a 16 game winning streak in all competitions.

Man City quickly got into their groove early at Goodison Park, creating plenty of early chances with Gabriel Jesus a particular livewire, and they finally got their breakthrough in the 32nd minute. Riyad Mahrez’s cross from the right was cleared by Michael Keane but only into the path of Phil Foden, the Englishman’s strike taking a wicked deflection off Everton club captain Seamus Coleman to see the ball beyond go beyond Jordan Pickford.

Everton quickly pulled themselves level though, Coleman standing a cross up towards the back post, the ball being met on the half-volley by Lucas Digne. The Frenchman’s effort came back off the far post but fortuitously hit Richarlison and into the back of the net – the Brazilian knowing little about his decisive touch.

City again came out quickly in the second period with Pickford making a low save while Gabriel Jesus fired over within the first 10 minutes after the interval.

In the 65th minute, though, the league leaders regained their lead in sensational style. The Citizens knocked the ball about effectively and efficiently before Riyad Mahrez crashed an unstoppable strike beyond Pickford, the Algerian curling the ball in off the post with his left in trademark fashion.

The third came in similarly delicious style, Bernardo Silva picking the ball up from a Gabriel Jesus layoff, taking a touch while on the move to set himself before firing past Pickford, the England number one getting a hand to the Portuguese’s striker but unable to keep the ball out of the back of the net.

Speaking afterwards, Catlo Ancelotti admitted his side had an ‘almost impossible’ task against ‘the best team’ in the league, City now 10 points clear at the top of the division.

“It was hard, almost impossible,” he told BBC Sport. “We were in the game for an hour and we fought.

“When they scored the second goal it was very difficult. They are the best team and we are not at the same level. They don’t have only quality, they are also strong.

“At the moment they are the best team, they have quality, power, belief. It is very difficult to compete with them.

Next up for Everton is the latest instalment of the Merseyside derby, Liverpool having lost all three of their recent league games to leave them outside of the top four.

“It will be a different game against Liverpool,” said the Italian. “We are on a good run away and we believe more. Liverpool are a fantastic team but in football you never know.”

See also – Fantasy Premier League: How to get the most out of your chips in the coming gameweeks