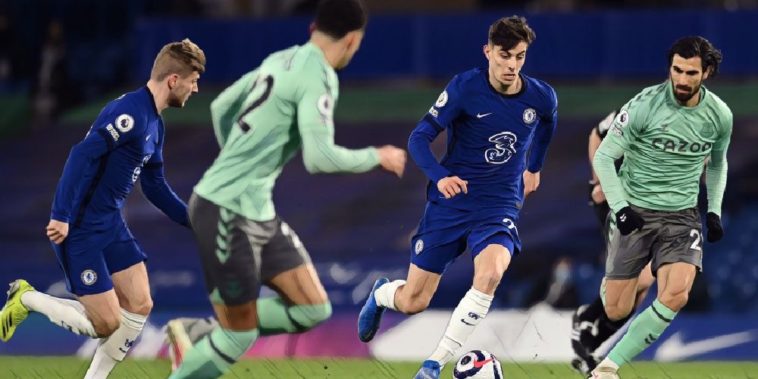 Everton’s hopes of securing a top four finish took a knock as they were beaten 2-0 by a resurgent Chelsea at Stamford Bridge.

The two sides came into the game separated by just a point, Chelsea in fourth and Everton in fifth, the race for next season’s Champions League looking to be an exciting one.

Chelsea have been excellent since the appointment of Thomas Tuchel in late January, and they took the lead just after the half-hour mark. Callum Hudson-Odoi slipped Marcos Alonso down the left-channel with the Spaniard playing the ball into the box towards Kai Havertz. The German attempted a first-time finish, and while his effort was going wide, a deflection off of Ben Godfrey send the ball goalbound to leave Jordan Pickford helpless.

Pickford produced a smart save down to his right five minutes before the interval to deny Marcos Alonso, while Havertz put the ball in the back of the net again 10 minutes after the break, taking the ball down before swivelling and firing past the Everton ‘keeper, only for the referee and VAR to judge that the German had controlled the ball with his arm.

Chelsea would however double their advantage just after the hour mark, and once again, Havertz was involved. The summer signing got in behind the Everton backline following a ball from Matteo Kovacic from deep, knocking it past Pickford and being brought down by the England number one. Regular penalty taker Jorginho stepped up and rolled the ball home from the resulting spot-kick, sending the ‘keeper the wrong way.

Everton had limited opportunities throughout as Thomas Tuchel’s side controlled the vast majority of the game, and speaking afterwards, Carlo Ancelotti admitted his side simply aren’t at the same level as the west London outfit.

5 – Chelsea boss Thomas Tuchel has become the first manager in Premier League history to see his side keep a clean sheet in each of his first five home games in charge in the competition. Solid. #CHEEVE pic.twitter.com/0YjAnP0Xya

“They played better than us,” the Italian told BT Sport. “They deserved to win. We were good defensively for 30 minutes. When they scored the game became difficult for us. They are a good team.

“Jordan did well. For the penalty, he can do better but it doesn’t change the performance. I think it was a penalty.

“The game that we planned was what we got for 30 minutes. We didn’t have a lot of opportunities. Richarlison had a chance. But we have to be honest, we are not at the same level. We cannot play an open game against this kind of team. It was the plan to play the same way as we played against Liverpool, but against Liverpool, we scored early.

“We are looking to fight for Europe. This is good for us. We will be there until the last game. We are disappointed for this defeat but no tragedy. We look to the next game.”

Next up for Ancelotti’s side is a home game against Burnley next weekend.