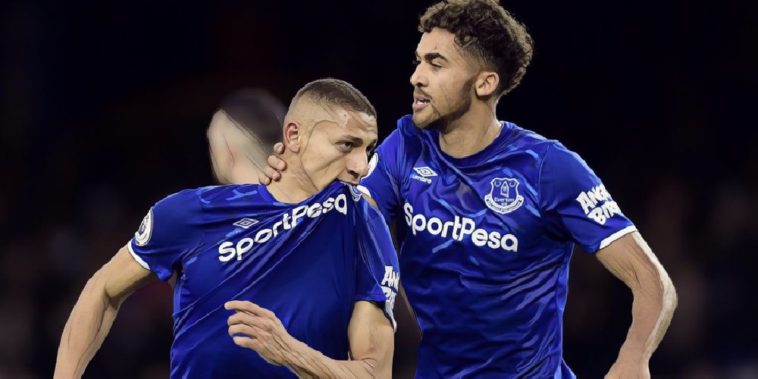 Carlo Ancelotti has spoken of the importance of Everton forwards Dominic Calvert-Lewin and Richarlison and praised the duo’s energy in their defensive work.

Everton have enjoyed a positive restart to the Premier League season and are eyeing European qualification following the club’s midweek win over third-placed Leicester, the Toffees’ unbeaten in three league fixtures since the resumption of the campaign.

The success of Ancelotti’s side has been built on a two-man partnership of Calvert-Lewin and Richarlison in attack, the duo industrious in their approach to the game and setting the tempo for the side’s pressing play.

Calvert-Lewin has enjoyed a career-best season with 13 league goals but is yet to find the net since the restart, though Ancelotti is unconcerned by that statistic given the 23-year-old’s all-round contribution to his team.

“It’s true that he hasn’t scored [since the restart] but I think that the most important part is the work that he’s doing, also defensively,” the Italian said at his pre-match press conference.

“The fact that we’ve done well defensively comes from the work that all the players were able to do, the strikers first with Richarlison and Calvert-Lewin doing a fantastic job defensively.

“I’ve never had strikers, honestly, with this kind of energy defensively. I appreciate this a lot.

“It doesn’t matter if he didn’t score, because he will score again without problem.

“I never asked my strikers in the past to score goals. Work well, work for the team, be humble.

“Dominic is doing all these kind of things and I am really happy with this.”

Everton will be looking to continue their push towards continental qualification when they travel to face ninth-placed Tottenham on Monday night.