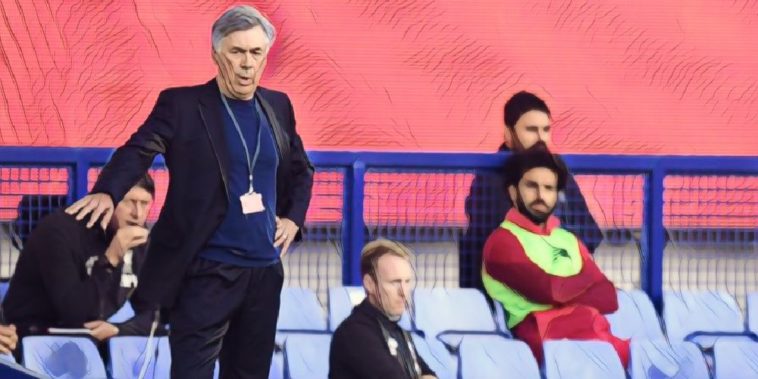 Everton became just the third team to take points off of Liverpool this season, the 236th Merseyside derby finishing as a goalless draw.

In honesty, the game won’t live long in the memory, with a disciplined Everton side restricting their cross-city rivals to just a handful of half-chances throughout the match, with the Toffees having the best of the goalscoring opportunities, particularly in the second-half, despite not seeing much of the ball.

Richarlison saw an early attempt fizz across the face of goal, before Dominic Calvert-Lewin forced a good save out of Liverpool ‘keeper Alisson late on, with Tom Davies’ follow-up coming back off the post.

In the absence of their passionate crowd, Everton were compact and well-drilled throughout, and Carlo Ancelotti admitted he was pleased with the focus and sacrifice his side needed to show to perform their diligent defensive duties.

“Honestly we were really close to winning but it was a tough game, difficult game,” Ancelotti said in his post-match press conference. “We performed really well. We were focused, we sacrificed. We had opportunities to score at the end.

“Liverpool played a good game, they had more possession but defensively we were really good.

“Offensively we tried to build from the back. They pressed really high and it was difficult to find a solution from the back so we decided to play more long ball.”

The Italian revealed that he is keen to start turning Everton’s promising performances into victories against the biggest sides, having held Manchester United to a draw at Goodison before football’s shutdown in March.

“We have to win games, this is our goal, to try to gain points and to win,” he continued.

“The period before lockdown we played against top teams and didn’t win. We competed well against Manchester United, too, when we are focused and work well together we are a good team and can compete.

“Now it is time to win and try to climb the table.”

The result moves Everton back up to 12th, while Liverpool’s wait to lift that elusive Premier League title will be extended further if Man City beat Burnley on Monday night. A City win would deny Liverpool the chance to claim the title in their midweek fixture against Crystal Palace, with Jurgen Klopp’s side facing a trip to the Etihad in their subsequent outing on July 2nd.