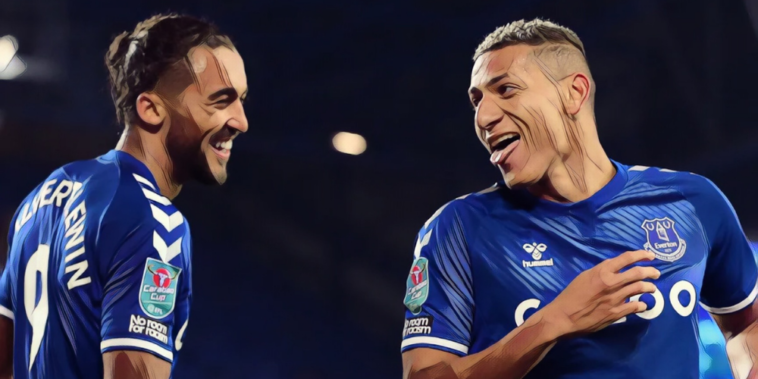 Carlo Ancelotti has insisted that he’s fortunate to be able to work with promising young Everton strikers Dominic Calvert-Lewin and Richarlison.

Since taking the Toffees job back in December 2019, the Italian has sparked a change in fortunes at Goodison Park, his side currently in the race for a top four spot and possessing a real chance of finishing above rivals Liverpool for the first time since the 2012/13 season.

One key reason behind their excellent form this term has been the rise of Calvert-Lewin, who has hit 13 league goals so far this season with the England international having developed into a lethal poacher around goal.

The 23-year-old has thrived under Ancelotti, forging a fearsome partnership with teammate and fellow forward Richarlison, the two men having been integral to the club’s success so far this season.

The Brazilian endured a difficult start to the season but has scored six goals and provided a further three assists in the league, netting in each of his past four appearances including scoring a crucial opener in Everton’s first league win at Liverpool in over 20 years last month.

Ahead of a potentially pivotal game for their Champions League qualification hopes against Chelsea on Monday, Ancelotti was full of praise for his striking duo and insisted that he was a ‘lucky man’ to be able to work with them.

“We have two fantastic strikers,” the Toffees boss told his pre-match press conference. “They are really young, they can improve. They combine well together. They have different characteristics.

“It’s not easy to find these kinds of strikers so I am really pleased to be their manager.

“They have it all in their hands, because they are modern strikers in my opinion who have everything. They are strong, they are fast, they are good without the ball.