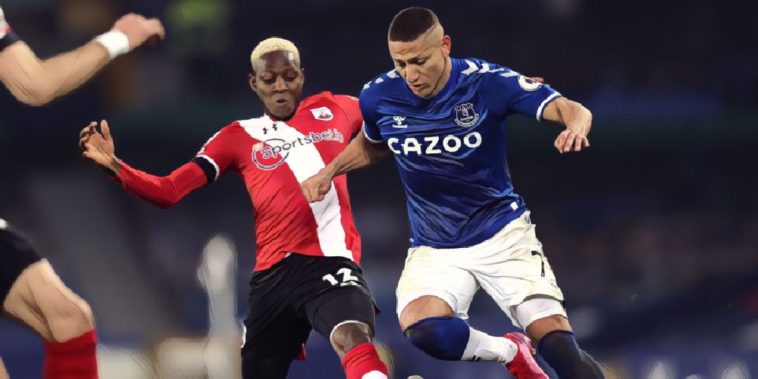 Everton moved to within two points of the top four with a hard-fought 1-0 win over a sorely out-of-form Southampton side at Goodison Park.

Everton have struggled for results at their famous old stadium of late, though they took the lead with an early goal. Gylfi Sigurdsson slipped a fine ball between the Southampton defender with Richarlison making a darting run into the box, taking a touch to get around Fraser Forster, before tucking home from a narrowing angle in the ninth minute.

The Toffees thought they had doubled their lead midway through the first half, a Sigurdsson free-kick towards the back post being put back into the middle by Mason Holgate, before Michael Keane reacted quickly to head home, only for VAR to spot an offside by Holgate in the buildup.

Southampton are statistically the most out-of-form side in the Premier League, picking up just one point from their last seven league games, and while they played some decent football, they lacked quality in the final third with their final ball often lacking.

This pattern continued throughout the second period, with Ralph Hassenhuttl’s side failing to get a single shot on target until the 90th minute, Jordan Pickford making a good save to deny Jannik Vestergaard.

In fact, Richarlison’s winner was the only other shot on target in what was a game somewhat lacking in quality, though speaking afterwards, Carlo Ancelotti was pleased with his side’s display which came on the back of last weekend’s win in the Merseyside derby.

More than everyone else on the pitch combined (3). pic.twitter.com/2f1IjJRSI4

“It’s been a very good week, a very good performance,” he told Sky Sports. “I really appreciate the teamwork, we were focused defensively, had a good combination in front. The performance was good and we deserved to win.

“We won a second ball and then Richarlison did a good movement, our striker was a little bit different. Dominic (Calvert-Lewin) played centre-right and did, in my opinion, really well.

“Richarlison is a fantastic talent, we have two fantastic strikers with different characteristics.

“When you are 1-0 up the last minutes are always the same, the opposition team puts a lot of power in and we had to control. They had practically one opportunity. Pickford was good in the goal, really secure. I am really pleased, honestly.”

The result keeps Everton in seventh, though moves them to within two points of West Ham in fourth, the race for Champions League places having heated up after Man Utd, Leicester, West Ham and Chelsea all dropped points this weekend.

“To fight for European places we need to improve the home run, this performance and victory can help us have a better run at home,” Ancelotti said. “It will be a dream to be in the top four at the end of the season. We are quite close, if we win Thursday, but the decision is long – we have to stay in our goal which is to play Europa next season.”

Everton next face former boss, Sam Allardyce, and his relegation-threatened West Brom side on Thursday at the Hawthorns.