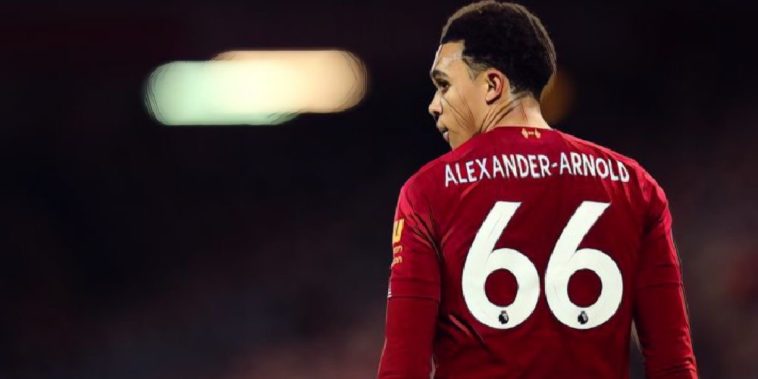 Trent Alexander-Arnold has opened up on his England struggles, having slid down the pecking order at right-back under Gareth Southgate.

The 22-year-old has developed into of the top full-back’s in world football in recent years at club level, going on to record an impressive haul of 34 assists in the Premier League since making his debut in 2016, including a notable tally of 13 assists in the 2019/20 campaign – the most ever by a defender in the top-flight.

Despite that stunning form and his key role in Liverpool’s Champions League and Premier League success in recent years, the Englishman has struggled for regular game time at international level, having made just 13 caps for his country since his debut in May 2018.

That lack of action has largely been down to the intense competition at right-back in the Three Lions squad, with Southgate often favouring the more experienced duo of Kyle Walker and Kieran Trippier, as well as fellow up-and-comer Reece James.

All of four men had been included in England’s 26-man squad for Euro 2020, despite persistent speculation that Alexander-Arnold would miss out, before the Reds defender was unfortunately forced to pull out of the tournament after picking up an injury in the warm-up games.

The form of Walker, in particular, in the nation’s surge to the final over the summer has perhaps pushed the Liverpool man even further down the pecking order at right-back, amid suggestion that he could well feature against Andorra at the weekend in a midfield berth.

Ahead of that World Cup qualifier at Wembley, the youngster has admitted he hasn’t ‘been the best version’ of himself for his country and by his own admission has produced ‘mediocre’ displays to-date.

“It’s difficult to say really, isn’t it?” He said, as per the Mail. “Because you’re playing a different system, with different players… it’s no excuses but it’s hard to find your feet, to find form. Everyone and anyone is going to have difficulties with that.

“To be fair, since I’ve come into the squad, I haven’t really been the best version of myself, I haven’t put in the performances I have regularly for my club. I expect more for myself when I play for England.

“That’s what I try to do every time I get the opportunity and hopefully now over the next week I am given an opportunity to perform and am able to take it. I had a really good game a few years back in the Nations League third-place play-off against Switzerland [in 2019].

“I thought I played really well then but I just couldn’t hit the ground running after that. Other than that they have been mediocre performances by my standard and that’s what I need to improve. That’s what I have been working on.

“Obviously with less games come less opportunities. There’s massive competition for a place. It’s probably one of the most over-populated positions, with amazing players so it’s always going to be difficult to find yourself in a position where you are playing regularly. At my club I’m a regular who plays most of the games. I think it is just not finding form and finding the level I need and the level I demand on a daily basis. I have just not been able to reach that bar.”

He had found himself at the centre of debate ahead of the European Championships after being left out for the March internationals, before his eventual recall ahead of the tournament was cut short due to injury, leaving him feeling ‘gutted’ to miss out.

“That was a tough one for me. I had put in a lot of hard work and it was a massive honour being named in the squad. I was looking forward to it and I was up at Middlesbrough with the lads putting in the preparation to get things right at the tournament.

“Obviously the injury strikes and it’s unfortunate for myself but it is football, these things happen. I felt sorry for myself for a little bit — but after a few days you get over it, and I started working hard to get ready for the start of the season.

“As for the lads, a part of me was disappointed not to be there. I was gutted I was missing out. But at the same time you’re watching your mates achieve special things, things that hadn’t been achieved for the country. So I was proud watching on, seeing the joy in the faces of people watching. At the World Cup [in 2018] I was in that bubble, so you don’t really know what it’s like. You hear all the stories, but when you’re outside that bubble and get to see it first hand, it’s incredible. To see the whole country behind them, it was moving.”

The versatile full-back went on to reveal the discussions he has had with the England boss and admitted that he needs to work on the ‘defensive side’ of his game in order to feature more regularly.

“We [Southgate and I] have had talks. We talk about things that I’m doing well, things I can improve. We have touched on the defensive side of my game a bit more, to be a bit more reliable and trustworthy in that respect and that’s something I know I need to work on. I know what I need to work on and being able to put that in training and show the coaching staff that I have been and am working on it.”