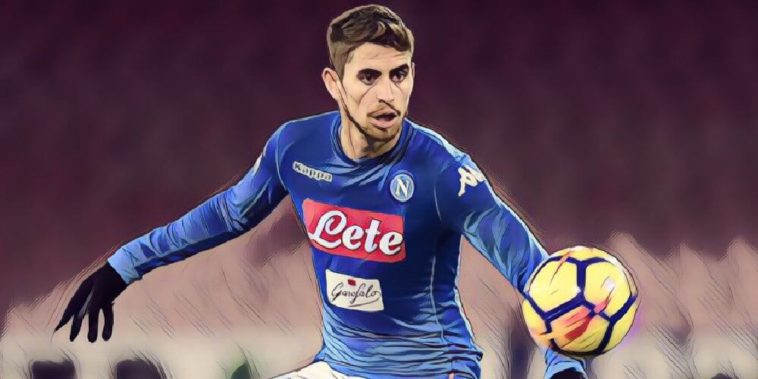 It has been the most exciting Serie A title race in years, with Napoli pushing serial winners Juventus all the way. However, as is usually the case with surprise packages, Napoli’s excellent form has seen some of Europe’s giants casting a keen eye over their best performers.

One of those top performers this season has been Italian international midfielder, Jorginho.

The energetic and combative midfielder has been an integral part of Napoli’s rise this season, and now his agent Joao Santos has confirmed that ‘four or five’ Premier League clubs are interested in his clients services:

“He’s been at Napoli for more than four years, his son is Neapolitan,” Santos told CalcioNapoli24.

“He felt he could give something to the Neapolitan people. He cried after the draw, but they weren’t tears of joy. He hoped to do something for the Napoli fans.

“His future? He’s a professional, he gave everything for Napoli, he feels Neapolitan in every sense.

“It’s a difficult time for him, everyone expected more than second place.

“A Manchester City bid for Jorginho? Everyone knows there are four or five Premier League clubs who want Jorginho.

“Jorginho still has two years left on his contract, and if Napoli want to sell him, he’ll just have to find an agreement with another team and then he’ll have to talk to us about it.

“A hypothetical renewal with an amended contract? We’ll have to wait until the end of the season to talk to Napoli. Anything can happen in football.”

While he did name drop Manchester City, Liverpool and Manchester United have also been linked with having an interest, as all three clubs look to strengthen their midfield departments this summer.