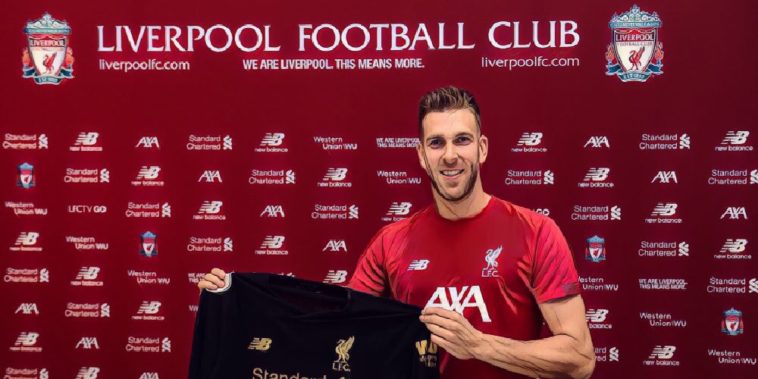 Liverpool have completed the signing of goalkeeper Adrian, with the Spaniard admitting that he is looking forward to the ‘big challenge’ of joining the European champions.

Adrian moves to Anfield on a free transfer after leaving West Ham at the end of last season, replacing Simon Mignolet as Liverpool‘s back-up goalkeeper after the Belgian completed a £6.4 million move to Club Brugges on Monday.

“I got experience in the Premier League and I’m coming to a big club to fight for everything. It’s a good challenge, a big challenge for me to face, challenging with big players here.”

The Spaniard will be an understudy to first-choice ‘keeper Alisson Becker, who moved to Liverpool in a £68 million move from Roma last summer, but Adrian says he is happy to try and push the Brazilian for the number 1 spot.

“Yeah, I like a big challenge. It’s a big challenge for me to work with Alisson – he is in great form in the last few seasons, he’s showing he’s at a great level, one of the best in the world I would say. I’m happy to work; competition is great and makes us much better. I come here to fight, to give a push to him as well like a teammate, and also push for the No.1.

“He’s a great ‘keeper, he’s doing very well. His first season with Liverpool was magnificent. I come here to have a competition with him, a positive competition that helps us to improve. The competition makes us better and I’m looking forward to working with him and the goalkeeping staff.

The phrase ‘goalkeepers union’ is one often bandied around, but despite likely being set to spend a lot of time on the Anfield bench, Adrian has revealed why it is important to have a ‘good relationship’ with fellow ‘keepers.

“The goalkeeper relationship is special, it’s different because we train apart from the [other] players as goalkeepers. We spend a long time together so we need to have a good relationship,” he explained.

“It’s the manager’s decision if he’s going to put you or the other in the No.1 spot, but both of us are fighting for the club and to make the club big. To fight and have that healthy competition with Alisson is going to be much better for the club.”

See also – The Week In Transfers: Maguire, Kean and Cutrone